Last week, the countries formerly under the reign of the Catholic Kings celebrated Carnival, their annual week of debaucherous revelry in the lead up to Lent. This was my second time witnessing Carnival in Rio de Janeiro, so I laid low this year, staying away from the crowds at the block parties. The whole thing last one month. However, that gave me more time to pay closer attention to the popular Sambódromo competition between Rio’s biggest samba schools. I’ve become more excited about the whole competition once I learned how important they were to visibility of both favela communities, and especially of Afro-Cariocas.

This year’s Samba schools didn’t disappoint, as many themes of African pride came out. There was Viladouro with their tribute to the contributions of people of African descent to Brazilian culture and society (cause we raised your kids!). There was Imperatriz Leopoldinense with their tribute to Nelson Mandela. Second place Salgueiro, my favorite school last year, dedicated their parade to the mixed cultural heritage of Minas Gerais state, and the manner which three influences, European, African, and Native American are blended through food.  And this year’s winners Beija Flor of Nilópolis with their impressive homage (complete with animatronics) to … Equatorial Guinea. This last one had me confused a bit.

When I first noticed the lyrics of the Beija Flor song, it was in passing on one of the many TVs that were displaying the parade the day after the competition. I initially thought it was just using Equatorial Guinea as a generic signifier for the Atlantic coast of Africa–keeping in line with the celebration of African heritage many of the schools engage in. However, if I didn’t get it immediately, that jersey from the National football team of Equatorial Guinea being worn by the percussionist in the video is a tip off that this Samba is in fact a full on dedication to the tiny Central African coast country. And it turns out that  it was none other than President Teodoro Obiang who allegedly sent millions of Reais to the school as a sponsorship!

While I’m new to this whole Sambódromo thing, so this is quite strange to me. Besides a corruption of my beloved Sambodrómo Afro-centrism (one of the only times you see it in mainstream Brazilian media), why is Obiang spending money in Brazil on a Samba school from the suburbs of Rio de Janeiro? I only had to think back a week to the African Cup of Nations tournament which was broadcast on cable network SportTV here in Brazil.

In watching the Brazilian broadcast of that tournament, the announcers were enthusiastic, and seemingly excited to share new facts about the countries that were competing in the contest. They proudly displayed facts about chief exports of competing countries, the location of their capitals, and the principle languages or ethnic groups. But they had a particular curiosity with Equatorial Guinea, a country who’s principal governmental language is Spanish, and who just last year had joined Brazil in the Comunidade dos Países de Língua Portuguesa or the Community of Portuguese-speaking Countries ((CPLP).

Now Portuguese and Spanish are closely related, but no matter how hard I try with my Portuñol, I know that they’re not close enough to submerge one within the other. The TV announcers made their best crack at an explanation, saying there was some Portuguese influence in Equatorial Guinea’s Spanish. I’ll only take that as a possible explanation since Angola is a large and dominant regional influence. However, when Equatorial Guinea entered the CPLP, Lusophone union of countries, earlier in 2014, other Portuguese-language media weren’t so readily convinced by the new addition: 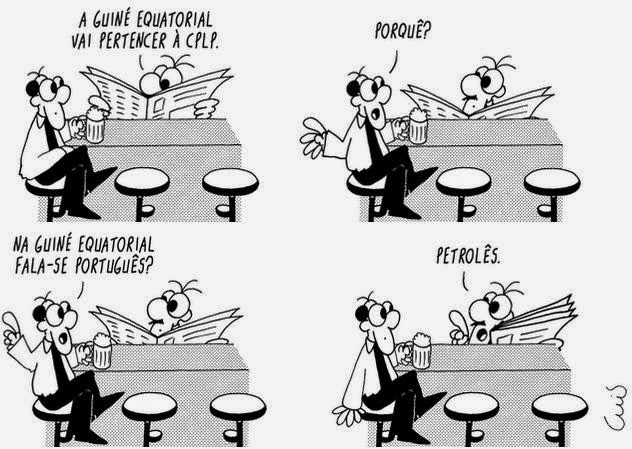 As Portuguese artist Luis Alfonso’s cartoon points out, through some surface exploration on the subject one can find that the CPLP, “the fourth largest producer of oil in the world,” would be interested in including not only Equatorial Guinea, but a “growing number of larger nations [are] attempting to enter the organization, such as Turkey and Indonesia.”

Most Africa is a Country readers already know what philosophy Obiang subscribes to. However, I wasn’t so sure about my SportTV announcers. It wasn’t until after the end of the tournament that they made clear their opinion on the leader of the country that had hosted them for the past month. As Obiang graced the awards stage to hand the African Cup of Nations trophy to winner’s Cote d’Ivoire, the announcers laughingly admitted that Obiang is a leader who “leve toda a riqueza do pais para ele!” (keeps all the country’s wealth for himself!).  Not a brilliant first impression for the newest member of a partnership founded on the “defense of peace and human rights”:

So, why did Obiang fund the Beija Flor Samba School? Was this his attempt to win the hearts and minds of the citizens of Brazil? Did he think by bankrolling a popular Samba School, and having them sing your praises (over, and over, and over, and over) to a rapt national audience at the biggest Carnival parade in the world, he would convert the masses to his side?

Of course once word got out that Obiang was involved, there was backlash in both the Brazilian and international media. The school denied that his sponsorship bought the tribute, or the win. And, as the composer of the song,Neguinho, pointed out, there is a bit of hypocrisy in the critiques of the Samba school accepting the money. “Agora, nós vamos falar do país negro e de um ditador… na Europa, naquela época que maltratavam o negro, era pior que a ditadura” (Now, we talk about a black country, and about a dictator… in Europe, and that period that they mistreated black people, it was worse than a dictator).

Now Neguinho is pulling a bit of a Robert Mugabe bait and switch in his defense of African dictators. In order to get his point across, he should have just pointed out the neo-liberal onslaught of Rio de Janeiro over the past couple of years, and the international “investments” in the city (that mostly went into officials’ pockets) by corporations like FIFA, the IOC, and their various sponsors and corporate partners. With the kind of money that’s been flowing in Rio in recent years, what’s wrong if a Samba school from a poor suburb takes a little cash to supplement their run at 2015 Carnival champions? Regardless of your position on the matter, what is evident is that Obiang’s PR campaign to the Brazilian people has made an impact. And if he ever eventually does get chased out of Equatorial Guinea, there is a small community just north of Rio de Janeiro that I’m sure would love to take him in. 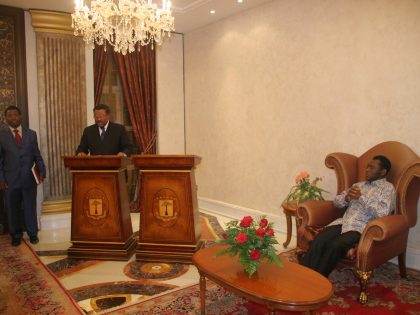 Eqatorial Guinea in West Africa was a Spanish colony. Few Spanish football fans know where it is or how the rulers continue the violent politics inherited from Spain.