After the release of his first feature back in 2011, the gangster thriller Viva Riva!, Djo Munga (41), hailed as one of Africa’s most promising filmmakers, said: “A filmmaker processes images absorbed through his environment and upbringing.” Viva Roa!, Laced with violence, crime and eroticism, is the first feature film to come out of the Democratic Republic of Congo (DRC) in over 28 years and tells the story of a charming and ambitious street hustler, Riva (Patsha Bay Mukuna), who is on the run from a crime boss after fleeing Angola with a truckload of stolen fuel. Here’s the trailer.

“The film was a success. People would say ‘He made a film in Congo! What a hero!’ But that’s because of the perception of chaos in the Congo. Media builds perception and expectation; so people have the idea that it’s mad to do a film in the Congo,” he says. “Why is it mad?”

As the county celebrates 54 years of independence, the narrative of the DRC continues to be consumed by rebels and soldiers, poverty, bad governance, war and endless chaos. Shooting a film in the DRC instead of Europe or America meant hard work, creativity and building infrastructure sorely lacking in a country with little political stability and a strained economy.

“People were so surprised when we filmed Viva Riva! because we were organised. People thought it would be chaos. But what is chaos?” asks Munga.

“We have lots of [informal] taxi drivers in Congo who work really long hours for low wages. We struck a deal with them; they worked for us for three months, and doubled their salary. If you build a system of organisation you get productivity,” he says. Although there was a good deal of international muscle (the assistant director was Canadian, the sound engineer was Swiss and the director of photography was French) all the assistants were Congolese.

“It takes time to implement a production company in an environment that is not designed for such a structure. You need to constantly rethink the model, the concept and your goals,” says Munga, his task made more difficult as there are no movie theatres in the Congo.

Former President Mobutu Seko shut down the film industry in the 1990s, and as a result Munga says the new generation lacks the ‘emotional memory’ of cinema. While Viva Riva! was being screened in theatres overseas, Congolese watched the action on a local TV station. “People don’t have nostalgia of something they don’t know,” he says. “Congo is not a place that looks at the past.”

The DRC is one of Africa’s richest mining countries; minerals including copper, cobalt and diamonds are abundant. Colonized by Belgium in 1908, the DRC gained their independence in the 1960s. Munga was born about a decade after independence, during a time of economic decline due to dependency on the international market. The 1980s saw Belgium pull development programs, which furthered the deterioration of their economy. It was in this environment that Munga’s parents sent him and his eight siblings to be educated in Belgium at the tender age of ten.

“When I graduated 17 years after, I went back to Congo and could see the effect that a lack of education had, we were on the end of a war as well. But you have the structure of a society that you’ve known since you were a child, you still have those links to your community,” he says.

Hailed as an ‘African trailblazer’, the industry is certainly keeping a keen eye on him, while is more concerned with African filmmakers being curators of their own experience. “You don’t create new images. Humans don’t work like that. You have a history of images. Your environment shapes your profile. However he insists “there are no stories that come out of me from Belgium”.

He compares the work of making films and documentaries to a museum curator, selecting a certain told history, processing ideas, which allow the viewer to experience selective perceptions of a people, countries and cultures.

Munga is known for producing a quartet of short films Congo in Four Acts (2009), Ladies in Waiting (2009) and directing the documentary State of Mind (2010), which deals with overcoming national trauma after decades of violence and unrest in the DRC. He is currently shooting a documentary about two Norwegians who were jailed in the Congo for the murder of a taxi driver. 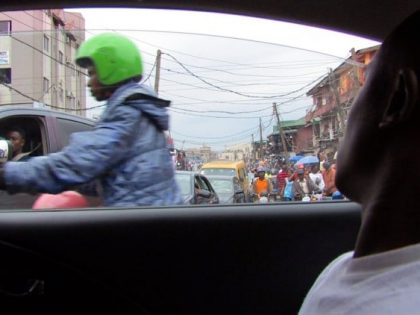 The tensions between young Nigerians eager to flee their country for a better life in the United States and those already exposed to US culture.