In 1994, Malawi’s longtime dictator Hastings Banda was dethroned from the palace of Sanjika and relegated to Mudi House, sandwiched between two roads that lead to the referral Queen’s Hospital, the latter revealing not only Malawi’s connection with pax Britannica but Banda’s fixation with aspirations normally associated with the British royal family.

After 30 years of manufactured consent built on four solid pillars – “Unity, Loyalty, Obedience, and Discipline” (towards Banda) — Malawi was ready to move on without the Old Lion. On the streets, yellow party colors had replaced Banda’s somber colors of black, red, and green. Thirty-year-old bottled expressions were ready to explode:  just months earlier, the marginalized had carpe-diemed by breaking into a chain of stores owned by Banda for such luxuries like soft drinks and bagged rice.

As teenagers during that critical juncture, we were experiencing our own kind of freedom. With liberated airwaves (and borders) and African-American pop music filtering into Malawi through cheap audio tapes via Dar-er-Salaam, we found an outlet for our angst through hip hop music. The thug theology of Tupac resonated with a closeness that was almost palpable. News of  Pac’s young death had some of us in real tears.

Around this time, future key members of the Bantu Khamuladzi (Bantu Comrades), Wandumi and Zimbiri, first met at a boarding school. The Khamuladzi, like most of the rappers then, began by mimicking songs heard from imported tapes. Ebonic accents were mastered and rap albums memorized, much to the admiration of some. But that parroting soon gave way to actual rhyme writing as they strove to outdo each other in what are still called battles.

Their first album, “Roots and Revolution,” came out in 2001, inspired by groups like Dead Prez. By then, they were an assortment of rappers and hangers on. The first single featured the late Stonard Lungu, Malawi’s own Bob Dylan, in a song originally composed by Malawi’s guitar maestro, late Daniel Kachamba, long connected with Gerhard Kubic, the foremost African music scholar. In a country without a formal music industry and without distributors, the album was sold almost on a record/per/demand method. It was rap rebel music that became an instant classic amongst their underground fans.

Later, Bantu Khamuladzi would undergo a rebirth and embrace fully their Africanness. Their second album “Umunthu” was an inspired potent brew containing thoughts of Steve Biko, Ali, Nkrumah, sung in Afro-Jazz. It reinterpreted culture as never been done before in Malawi. A radio station called Power 101, with a 101% dedication to urban music and a core target audience of 15 to 35 year olds, would give them a much needed outlet.

Their rebirth did not happen in a vacuum. Bantu Khamuladzi were exposed to music of a different kind at the French Cultural Centre in Blantyre. When the likes of Ishmael Lo, Habib Koite, Angelique Kidjo and Tiken Jah Fakoly came in town, Bantu Khamuladzi had front row seats.

Fans of Afropop will remember how French Cultural Centre, in an attempt to gain some cultural credibility, selected the then unknown Khadja Nin in 1996 as its summer act, catapulting her to world fame. Something similar happened in Malawi when the local television selected Khamuladzi’s beautiful music video “Afrika” as its poster video. Hitherto, music videos had been dull affairs of people dancing on green lawns. Afrika featured Malawi’s prominent feature, the lake. For the first time, a music video had a budget and an impressive wardrobe.

Post-Television Malawi, their fame grew across Malawi, peaking in 2006. The colorful African-inspired clothing worn in their videos would lead Khamuladzi to start a fashion label that was to dent Malawi’s landscape. Aptly named Khalidwe (cultural), the clothing would be embraced by urban Malawians with almost a vengeance. It soon also inspired a horde of copy cats, all of them with cultural names.

Around 2008 their decline was in motion. Chief amongst the causal factors was their refusal to incorporate business minded people in their ventures. Profits were not reinvested, orders were delivered late, quality was compromised, and more time was spent in recording studios on solo projects.

Still, the machine they had almost invented is still in motion. While it lacks density (none of its participators has sought to really take time and study ways of the ancestors and marry them with modernity), it has managed to turn itself into a serious business.  Today, Malawians refer to just about any African-inspired clothing as Khalidwe and modern hip hop and dance hall music in now sung in ChiChewa, Malawi’s main official language.

Recently, I met Wandumi. He is now back in the studio to record. For him, unfortunately, structures are still not in place to succeed. Not that it will stop him from making music. As a fan, all I can do is raise a clenched fist. The machine they helped invent is not perfect but it helps fellow Africans engage with what it means to be African, limited though that may be. 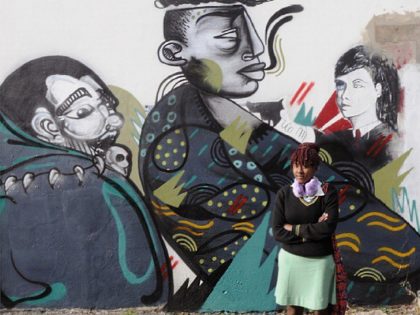 The perfect wall to paint

The illustrators Fuzzy Slipperz and Skubalisto and the photographer Mooki Mooks on being an artist in present-day South Africa.