“Raise your hand up if you’re a hip-hop head” said Lesego Rampolokeng, rallying a house full of poets at a gathering in Melville on a wet Sunday afternoon in 2013. I put mine up, as did a few audience members seated towards the back. The rest sat in the sparsely-occupied restaurant and gazed at the ones who were. We couldn’t be moved. We stood firm, resolute in our hip-hop-headness as one of our elders broke bread with us.

“I’m also an emcee” continued the street-smart spitter usually attributed the title of poet, but whose work stretches beyond that medium into novels (Blackheart), and theatre plays which then found a second life in film (Fanon’s Children).

When I last saw him, Papa Ramps as he’s affectionately known to the a-weh massive of the underground and yonder, was working on a film-cum-documentary of sorts which traced his journey in poetry through South African greats such as Mafika Gwala.

Back in Mellville, Papa Ramps has just begun reciting his Ode to Hymphatic Thabs. A head paying homage to another, how’s that?! “Mission emphatic,” he begun in his half-rapped, quick-paced style.

Barely a month had passed after the event when Robo the Technician passed away. Robo was instrumental in building the South African hip-hop scene; he was the link between the old school of Papa Ramps and the (new) school over which Hymphatic Thabs reigned supreme in the early 2000s. When Robo succumbed to illness, a legion of broken hearts were left behind. Papa Ramps recited a poem at his memorial service held at the Grayscale Gallery in Johannesburg. I arrived late and hence didn’t catch it, so I got in touch with the elder and asked if he’d let us reproduce the work.

Stake my neck on a train-of-thought-wreck lyric
& (flip it ruff, that pop stuff. gore on the prance-floor.
got a nightmare for a metaphor. muddy rhymes on bloody riddims…
oh lawd a messy…raw gawd of the ‘die…versified’)
While poison pulp pulse in joburg veins
Style it thus : that ‘poverty kills’ is no genius
& pervert the Jamaica thang:
‘mimic & live…create & the artist dead’
& that’s the shebang-bang
Like when the uniformed R1 / R4 rang

beyond material wretches-
from here to wherever this thing called life stretches…
no coffin, casket, tomb talk…antiquity
you’re rhyming the womb from here to eternity
(& that’s a true line of poetry— 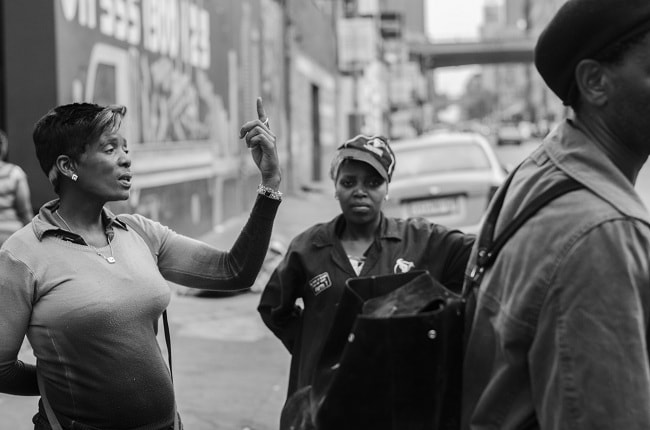 rap running past 2-1 crap lies
lined in paradise) & THAT ART this REALITY
the CORE you died for…opposite the grovel-floor
(verses aligned versus corporate prostituted ….executive perspective
sick-lie finance freakonomics in the mix, constitutes the retrogressive
posterity’s the genesis the END where it begin
no one line cretin-lyric….pioneer-spirit)
(we will yet see mahlathini growl turned
minimised cola-cola tinny as minnie mouse howl at devil’s end)
lyric-spit AK-spray oceanic pen-play
fuck who’s the televised best (keeps the fee
still no free-lip can they pay the sea?)
robo-tech poem-storm bomb-burst –
blast effects last beyond hiroshima genetics
itching for cullinan diamond shine
& joburg fame buried beneath mine-dumps
shaking soul-thief gold-reefed rumps sand-clogged
rectum itching for a Rustenburg platinum butt-plug
fantasise ‘up the aliment with a treacherous bone-/precious stone encrusted log’
toilet) bank-roll (selves) all exotic for tourist bog titillation
self-dehumanisation….
rust content rhyme on a dust-context rhythm
crapper-rappers got a bland crew rag joint
dumbed down to rap-n-fetchin’ clown pissy-blather-wack
(they made the move from ‘art of war’ to fart of gore when intellect-assault put mental to asphalt)
but) easy father tech, you got it slain on point…-pointing pain towards self-dignification!) respek

(This is one of the final performances Robo gave. Shot at The Bassline, October 2013)

*This article is part of Africasacountry’s series on South African Hip-Hop in 2014. You can follow the rest of the series here.

Sudanese women on the front lines of the resistance

Sudanese women took part in the revolution in large numbers for the same reasons they are now part of the resistance against this treacherous coup: Their human rights are at stake.

In this post, the writer, from Cape Town, reflects on the life of her working class father, who like her friends’ fathers worked tough jobs for low pay, and hid his vulnerabilities.

A new book on policing in South Africa wants to go beyond the usual call for reform. But adapting literature tuned for reform to the task of abolition is a difficult needle to thread.

Power to the People

This week’s episode of AIAC Talk is a replay of the launch of the latest issue of Amandla! magazine, a South African publication advancing radical left perspectives for change.