Many of us who were active in the international anti-apartheid movement are recalling our shared history as we reflect on Nelson Mandela’s passing. Here are some of our favorite graphic images from the struggle years, selected from the African Activist Archive Project. The US government was also on the side of the Portuguese colonial regime and the other white minority regimes in Rhodesia (now Zimbabwe), South Africa, and Namibia, so progressive Americans had a responsibility to both support the liberation struggle and oppose the policies of the US government and multinational corporations. 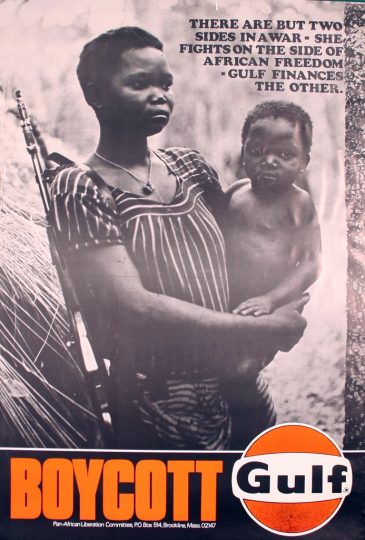 This poster produced by the Pan-African Liberation Committee in Brookline, Massachusetts in the early 1970s conveyed a crystal clear message: “There are but two sides in a war—she fights on the side of African freedom—Gulf finances the other.” The iconic photograph was taken by Boubaker Adjali, an Algerian journalist and filmmaker.

The Massachusetts Coalition for Divestment from South Africa (MASS Divest) created this poster below in 1981 to support Senate Bill 1138 requiring the state pension fund to sell stocks invested in companies doing business in South Africa. This multi-racial coalition, working with Representative Mel King and Senator Jack Backman, succeeded in making Massachusetts the first state to adopt total divestment of its public employee pension fund. This poster conveyed not only opposition to apartheid and its system of cheap, migrant labor but also a call for jobs and access to mortgages for people in Massachusetts. MASS DIVEST wrote a case study of their campaign that was published by the American Committee on Africa. Today, climate justice activists in Massachusetts are building support for a parallel bill focused on fossil fuel companies. 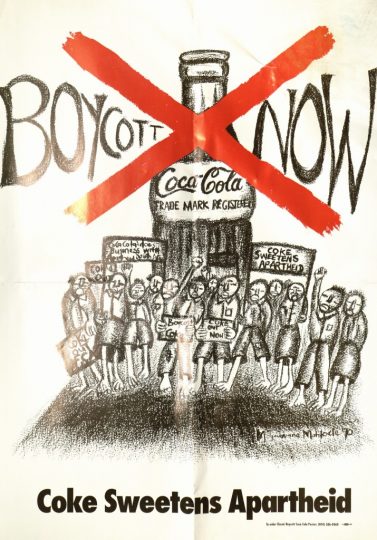 The boycott was initiated in October 1985 at the Midwest Anti-Apartheid Conference held in Chicago; the AFSC and Georgia Coalition for Divestment in South Africa brought it to Coca-Cola’s doorstep in Atlanta. The Atlanta AFSC effort was led by Thandi Gcabashe, the daughter of Chief Albert Luthuli who was President of the ANC from 1972 to 1967 and the first African to be awarded the Nobel Peace Prize.

The Africa Fund Labor Desk worked with US unions to forge direct “union-to-union” links with affiliates of the Congress of South African Trade Unions (COSATU) and to expand US union activism on sanctions campaigns, including divestment by the multi-billion dollar public employee pension funds. Activist artist Sarah Hodgson designed this poster to bolster work with a national network of municipal and statewide labor committees against apartheid, including the New York Labor Committee Against Apartheid and the Illinois Labor Network Against Apartheid; national unions including the UAW, the United Mine Workers of America, and the Amalgamated Clothing and Textile Workers Union; and pan-union organizations like the Coalition of Black Trade Unionists and Black Workers for Justice in the US South. 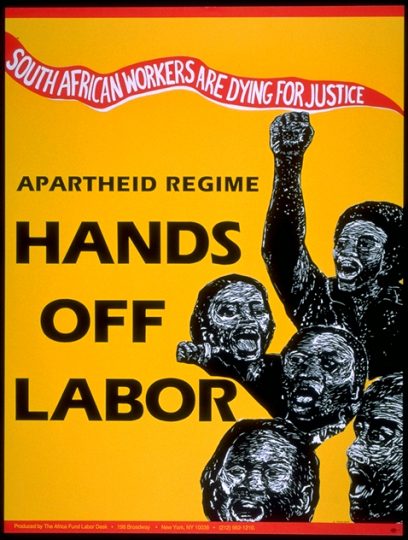 The poster was printed in 1992 by Inkworks Press, which produced hundreds of posters for progressive movements. One of our favorite buttons advocating labor solidarity is “I worked an hour for freedom in South Africa,” which was produced by the United Public Employees Local 790 of the Service Employees International Union (SEIU) in San Francisco in solidarity with the South African Municipal Workers Union.

This last poster, created by the Southern African Liberation Committee in East Lansing, Michigan, celebrated the 1994 first democratic election in South Africa with the joyful slogan, “The Sun Shall Rise.” 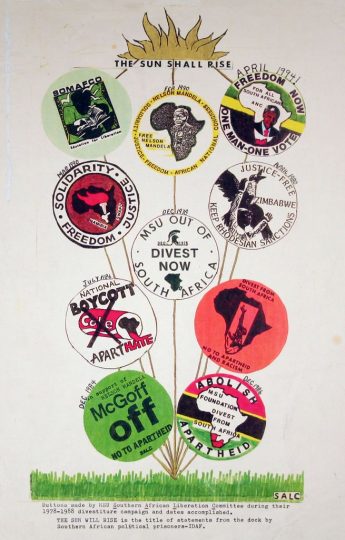 The poster design incorporated ten hand-made buttons from campaigns SALC had undertaken over the course of its 20 years of solidarity work. Among these campaigns were divestment by Michigan State University (1978), removing the McGoff name from a performing arts center in 1984 (Michigan newspaper publisher John McGoff clandestinely cooperated with the South African Department of Information), the Coke Boycott campaign (1986), and a material aid campaign for the ANC’s Solomon Mahlangu Freedom College (SOMAFCO) in Tanzania.

The African Activist Archive Project website contains more than 7,200 freely accessible documents, photographs, buttons, T-shirts, posters, and video and audio recordings from the African solidarity movement from the 1950s to the 1990s. We thank the more than 90 activists who have contributed materials to this collection. We have been adding about 1,200 items per year, and we are eager to hear from people who have kept organizing materials from this struggle. Contact us at [email protected] or follow us on Facebook. 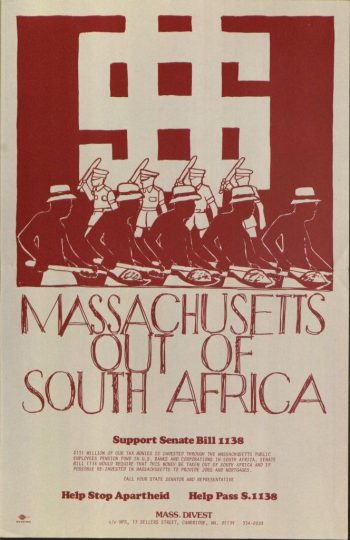 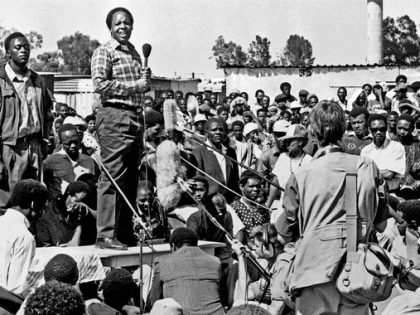