Mulatu Astatke has achieved what most musicians could only dream of: he invented an iconic genre. In the 1970s, Astatke pioneered a fusion of western jazz with the traditional sounds and instruments of Ethiopia to create Ethio-jazz. One could say he is the “O.G.” of Ethio-jazz (to use hip-hop parlance). Born in 1943, Astatke refuses to slow down, or rely on his rich past and diverse repertoire. His new album “Sketches of Ethiopia” was released recently under the international label Jazz Village.

The first time I heard Mulatu Astatke’s Music was in a dark art house cinema somewhere in Cape Town in 2005. The film being screened was Jim Jarmusch’s quirky comedy-drama “Broken Flowers,” a film about an aging Don Juan character, Don Johnston (played by Bill Murray) who receives a mysterious letter stating that he has a son. Don’s Ethiopian neighbor Winston (Jeffrey Wright), a mystery novel enthusiast, gives Don a fitting mixtape on his road trip to find his long lost offspring: the hypnotic sounds of Ethiopian jazz, “good for the heart.” One song in particular, Astatke’s “Yekermo Sew,” with its winding, mystical horn refrain, and funky steady rhythm, becomes the soundtrack of one man’s journey into the past and into himself. It was like listening to hip-hop for the first time, something so new to the ear and yet so familiar. Astatke’s music stood out as one of the highlights of Jarmusch’s film and propelled him into international cult status.

By then Astatke had already gained international acclaim. In the late 1990s his music was rereleased with the Parisian label Buda Musique’s “Ethiopiques” series, rereleases of “golden age” Ethiopian jazz and popular music originally recorded by Amha Records, Kaifa Records and Philips Ethiopia. This was to become a staple for hippies, hipsters and jazz lovers the world over. With the spread of his cult status in the west, Astatke has since collaborated with the Either/Orchestra and the Heliocentrics, and has received a number of accolades and awards from various institutions. Younger audiences have taken to him too, and his music can be found as samples on tracks from hip-hop artists like K’naan and Nas.

In “Sketches of Ethiopia,” his first album since the sublime “Mulatu Steps Ahead” (2010), Astatke leads a 12-piece team of London based jazz musicians through his signature Ethio-jazz blend of sounds, spaces and moods. The Ethiopian traditional instruments masinko, krar, and washint jam and blend perfectly with the traditional western jazz instruments; piano, bass, sax, etc. The first track, ‘Azmari’, kicks off with frenetic tense energy, like a cinematic chase scene in a busy Addis marketplace. Tight multi- instrumental jazz melodies build up and break beautifully. The second track, ‘Gamo’, is just as rich in soundscape but more upbeat and funky, and features emerging Ethiopian talent Tesfaye. The standout vocal performance however belongs to Malian singer Fatoumata Diawara. Her voice beautifully rides the Afro-funk/dub rhythms of the last track ‘Surma’. As with this inclusion of the West African kora on the album, Fatoumata gives “Sketches” a fresh East/West collaboration and a pan-African edge.

Astatke is a master of the vibraphone, which he studied at Berklee Music College in Boston back in the 1960s when he was its first African student (he now holds an honorary doctorate from the institution). In ‘Assossa Darache’, a gentle yet progressive jazz piece, he leads with his contemplative vibraphone, laying a bed for which complex jazz time changes and shifts later occur over its ten minute trajectory, with some fine solo piano work by Alexander Hawkins. However it’s Astatke’s vibraphone solo that is the real gem. It never steals the show — it is too respectful of the other instruments for that — yet it shines with its own quiet glow, adding an extra dimension and depth to an already exceptional jazz piece.

One of the things that always drew me to Astatke’s work was that it is both accessible and complex; familiar yet strange at the same time. There is a spiritual quality to Astatke’s Ethio-jazz that I can’t quite pin down. Perhaps it’s in the mystical middle-eastern sounding Ethiopian pentatonic scale, or the sadness of “Tezeta” (nostalgia) folk/blues songs from a region that is no stranger to suffering. It could be the Coptic church melodies, or maybe it’s in the searching and wandering nature of Astatke himself. What’s clear is that Sketches of Ethiopia is a bold album and a valuable contribution to the Ethio-jazz genre by a veteran who continues to push himself to further depths, a virtue which young musicians would do well to follow. 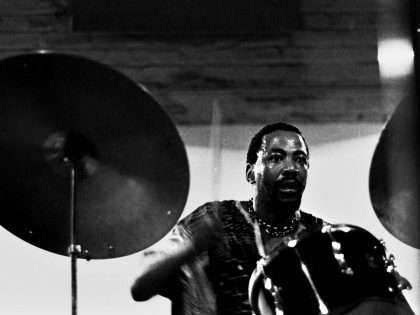 On a recent trip to London I was hoping to catch a performance by Cape Town drummer Louis Moholo Moholo, the last surviving member of the famed jazz bands, The Blue Notes and The Brotherhood of Breath. Especially with the release of "Before the Wind Changes," a live recording of The Blue Notes on tour in Belgium in 1979.