I have been photographing for 3 years now. I began at the start of my degree in Photojournalism at Falmouth University in the UK, from which I graduated this year. I was born in Zimbabwe in 1990, I grew up on a farm in Chipinga, as well as on one outside Mazabuka in Zambia. I then attended high school in Grahamstown in South Africa where I first became interested in political art and current affairs. I left South Africa in 2009 due to my British Passport education visa expiring, thus I chose to study in the UK. I originally wanted to study fine art, yet after more research into photojournalism I shifted my attention to photography, so in a way I’m more interested in communication than I am in photography itself.

I chose to embark on this Zimbabwe-focused project specifically because I am a Zimbabwean. When I moved to the UK, I was surprised as to how little the majority of those that I met knew about the Zimbabwe situation, let alone where the country is. This quickly turned to frustration with what I thought was naivety and ignorance. However, after intensely studying media I felt that it was the media itself that was the main culprit, as being the source of this attitude towards ‘Africa’ — an idea that I explored and wrote about at length in my dissertation. I also noticed that many felt that it was only the ‘whites’ that were affected by the ZANU-PF policy changes in the late 90’s. I also found it interesting that many people chose to come to the UK, the former colonial power to find sanctuary. Yet unfortunately for many the UK is not very welcoming.

With this body of work I wanted to shownot only the story of Zimbabweans attempting to find a life here, but also to attempt to change attitudes toward the idea of what an Asylum Seeker and refugee is. I wanted to somehow educate the general public on the complex situations that these individuals face here in the UK, a country seen as a champion of human rights — a kind of wake up call that our British government policy isn’t so friendly either.

This first image above was taken during a trip to Sheffield for an overnight prayer gathering of more than 500 other Zimbabweans from across the UK. It was like a much smaller version of the Marange annual Gathering which attracts tens of thousands back in Zimbabwe. It was the first time I realised the scale of the sense of community that exists within the Zimbabwean Diaspora in the UK. For those who have never been to the UK before, especially for those seeking asylum it can be a surprisingly hostile place. So in terms of the image itself it has come to represent finding shelter from the less attractive attributes of the UK, one of them being the weather, which after five years of being the UK I still cannot get used to.

Religion is vitally important to most Zimbabweans and plays a large role in our identity. I was very privileged to be invited to the mass, and this was a pretty lucky image to get. Those who belong to the African Apostolic Church take their worship very seriously so photography is most often not welcome. It is not permitted to take photographs during worship as it is feared that it will block the holy spirit from entering the room. So I had about a five minute gap for the evening in which I was allowed to take some shots before the start of prayers. This was the best I got out of seven images that I managed to take whilst being respectful that many in the congregation do not want to be in any photographs due to the sensitivity of their situation. I tried to achieve a sense of community, family and location, and the fact that I somehow managed to achieve this as well as with photographs of famous english footballers playing at the stadium in the background, I thought was sheer luck.

Patson Muzuwa fled Zimbabwe in fear of his life after countless imprisonments during which he experienced horrific bouts of daily torture due to his affiliation to the MDC. After help from a journalist who helped him escape the country as well as bail him out of UK immigration detention who at first dismissed his story as a lie, he managed to achieve Refugee status and was granted indefinite leave to remain in the UK. Many are not so fortunate so Patson now dedicates his life to aiding those who are seeking asylum, and are having trouble with negotiating their way through the often biased and inaccurate U.K. Border Agency (UKBA) system. This image has extra meaning for those that lived in Zimbabwe during the height of the financial troubles. Many supermarket shelves lay completely empty for months on end. The situation has vastly improved since then. I wanted to show how spoilt for choice those who live in the UK are, I also wanted again to provide a sense of location, a sense that the photos have been taken in the UK. Patson is also on his phone a lot, he has no office hours, he dedicates just about all of his time to helping others, and not only Zimbabweans. A drop-in centre for Zimbabwean asylum seekers that he helps run in Leicester welcomes anyone who could use his help and a hot meal, from Congolese to North Koreans.

Laurence is one of those less fortunate. He has been destitute in the UK since 1998 and has not spoken to or seen his wife or two sons since. In Zimbabwe he was arrested and jailed without trial for erecting posters advertising a teachers’ strike in 1997. He was jailed and tortured frequently for 3 months, all for names and addresses of MDC activists in his area. After his release he was threatened by not only ZANU-PF members, but also by those from the MDC who believed he may have leaked information. After his release he experienced what can be explained as undiagnosed PTSD, living in a constant state of fear and having received more death threats he fled to the UK where he was denied asylum after five months. After being kicked out of his council accommodation in Edinburgh that same day. Laurence is now a ghost according to government records. Unable to work legally, he relies on friends for shelter, money and food. A forced dependence all too common that causes many social issues amongst the Diaspora community. This is one of the few portraits that are in the series, but it’s one of the most important images. I prefer not to let my photography disturb or get in the way of any situation in my work. But after having a long conversation with him, I wanted to get a portrait of him alone. Not only did I want again to achieve the sense that this is in London, I mostly wanted to give a sense of the loneliness that can come with being an asylum seeker, especially being destitute. I also wanted to give particular attention to his story.

Crispin was a major football star in Zimbabwe, yet after becoming increasingly politically involved in the MDC he was targeted by the ZANU-PF youth militia, after enduring numerous assaults he was told to leave the country or he would be killed. When moving to the UK he unfortunately came to rely on drugs and alcohol, effectively withdrawing from society until he met Patson, who took him to church and drop-in centres. Crispin now bases the majority of his time around the apostolic church, yet his experiences still strongly affect him. This is one of the most important images that I have taken so far. It’s the only one that I have managed to take that creates a real sense of living in the UK yet still managing to stay connected to one’s roots, again also showing that religion for many Zimbabweans is very important. We were a bit late for Church, so Crispin and Arthur began their worship in Patson’s backyard.

This image didn’t make it into a final edit, but it’s a personal favourite. I hadn’t previously arranged to meet up with Crispin yet on this trip, but we randomly met while on a visit to the Library. I was with Patson to meet up with a Zimbabwean lady who needed some legal advice. He sat by a window flicking through a bible. I thought it summed up his situation quite well. Crispin used to drink heavily, and normally during free time he would be in the pub but since his new found devotion to religion he finds escapism here.

The Zimvigil protest, popular with Asylum seekers, take place every Saturday without fail, rain or snow. This day was particularly cold, wet and miserable. Yet quite a number of people still attended, and many couldn’t fit under the cover. This image for me partially sums up the protest, the multiple knots of old string left behind from 11 years of protest, holding up an old beaten up Zimbabwean flag lying still and soaked in the English weather. The persistence, formality and the organisation, yet one can’t help but get the feeling that the fight against the ZANU-PF regime is growing tired.

The fortnightly drop-in session in Leicester is organised by Patson and Pelagio, a Zimbabwean lady. Basically it’s where everyone can catch up with each other, as well as hear the latest developments in UKBA policy and Zimbabwean politics that affect their situation. It’s also a great opportunity for their kids to meet other Zimbabweans their age. There is a real effort to keep Zimbabwean culture alive for the children, with everything from music to language. These drums were brought in by a local English lady who teaches music. I don’t think she was prepared for how good these kids were!

As 42 opposition activists were facing treason charges in Zimbabwe for watching video footage of the Egyptian democracy protests, the Financial Times sent Alec Russell, its comment and analysis editor, down to Harare to interview … 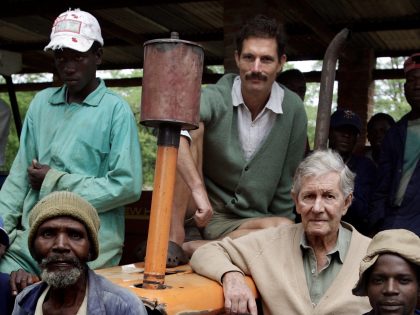 This film “Mugabe and the White African,” is too busy picking sides, to ignore and obscure land dispossession by Whites of Blacks, instead hoping to posit White farmers as outside of history.