The past five years have seen a flurry of activity around issues of restitution of African material heritage, resulting in new reports, new books and even, new returns. Along with this sudden surge in activity there has been an escalation in debate around these questions, where positions once thought to be entrenched, racist, conservative, and considered mainstream, seem to have shifted dramatically. In the frenzy, it can begin to feel as if things are changing and that society is progressing. But we’d do well to pause for deeper dives and more systematic remembering of what has come before.

Two books, Bénédicte Savoy’s Africa’s Struggle for its Art and Barnaby Phillips’ Loot: Britain and the Benin Bronzes, do this in different ways, but bring to us the important opportunity to remember again. In calling on us to remember, Savoy and Phillips separately  recenter the intentions, objectives, and justices that restitution seeks, the violences and obstructions already undertaken, and offer some strategies for ensuring greater success this time around. Savoy, an art historian, who along with Senegalese economist, Felwine Sarr, co-authored a report for the French government on returning African cultural artifacts, states in the new English language translation of her book  (forthcoming 2022):

nearly every conversation today about the restitution of cultural property to Africa already happened forty years ago. Nearly every relevant film had already been made and nearly every demand had already been formulated. Even the most recently viral videos on social media… by the Congolese activist Emery Mwazulu Diyabanza, had already been scripted in many minds by the mid-1970s. What do we learn from this?

Phillips is a former correspondent with the BBC and Al Jazeera and his Loot: Britain and the Benin Bronzes is a detailed telling of the story of  the approximately 4,000 objects in bronze, wood, and ivory taken violently in the plundering, by British forces in 1897, of the Kingdom of Benin (in present day Nigeria). . The story of the Benin Bronzes is an important one within the restitution discourse for various reasons, but perhaps most specifically because the terms of their taking were so clearly punitive and incredibly violent, and the claims for their return hold a relatively clear moral, geographical, and art historical grounding. Phillips looks to lay out in substantial detail the chronological telling of the context of their making, their theft, and their distribution across museums of the global north.

Loot: Britain and the Benin Bronzes is written first and foremost from the position of a personal vested interest in the story of the bronzes, and the impact that the violence and destruction that took place in their looting has had on a people, their culture and contemporary society. The book details the majesty and sophistication of the Benin Kingdom, using a range of oral histories, from those of the Benin royal family, their associates, as well as African academic writing on the subject. The bulk of the sourcing comes, however, from extensive historical British records. Phillips tells of the increased British activity in the area and the inevitability of a clash with the kingdom by colonialists. It details the widespread violence and destruction of the city during the British expedition, but also the seemingly indifferent and disconnected claim to the totality of the kingdom’s vast cache of exquisite and sophisticated court art pieces by the British: for the purposes of financial resourcing of the punitive expedition itself. Phillips then tracks the movement of these objects, through dynasties of families in Britain, and through museums of the world. He ends with a discussion of the attempts to have these returned to Nigeria, particularly since its independence in 1960, as part of a rebuilding of a society from the ashes of colonialism, and the Biafran War—the civil war that raged in Nigeria in the late 1960s and divided the country.

The book is sympathetic primarily to the voices and justified demands of Nigerians, and discusses in much detail the many turns of deceit and violence at the hands of the British in this long saga. It is, however, also written in a kind of specifically European tone of hazy “even-handedness” that spends overly-significant page space on issues such as the Nigerians’ unwillingness to discuss the rumors of human sacrifice by the Benin Kingdom that the British used to partly justify their actions, and on his argument for the likely accidental setting alight of the entirety of kingdom by the British forces. Both these issues become almost petty in the greater picture of total wanton destruction, violence and death not only at the moment of the expedition but also continuously after it—in physical occupation, and in spiritual and epistemic erasure. This marks the book as perhaps slightly out of step with some of the more contemporary literature emerging out of this moment within the broader restitution issue. This book possibly serves as a useful detailed description for a reader unfamiliar with the subject but offers little to the broader discourse on this issue.

Though Savoy’s forthcoming book tracks histories that strongly overlap with that of Phillips,’ it serves a far more urgent and direct call to remember these histories, and to lay bare the wilful amnesia and hidden obstruction that have previously completely derailed efforts at justice and repair. Savoy’s report that she co authored with Sarr commissioned by French President Emmanuel Macron about France’s role in plundering African heritage, was arguably the spark that reignited the now raging fire of restitution of African heritage. Africa’s Struggle For Its Art is concerned primarily with the context of historical West Germany. Nonetheless, her deep working through the archives—initiated first for the commissioned report—reveal a vital understanding of the global story of struggles for African heritage restitution and its historical defeat.

Using primarily the meticulous archiving by West German bureaucrats in museums, foreign affairs bureaus, and embassies, Savoy pieces together the early and relatively substantial attempts at opening dialogue on access to African heritage by Africans. Savoy puts Africans front and center of the dialogue and push for justice—as initiators of engagements on access to African history. She tracks in return, the systematic undermining of these efforts, with obstructive stonewalling and delay tactics that completely dismissed any attempt at even the most modest requests for engagement. Savoy argues also, for the extent to which the arguments against restitution have their roots in long standing racism, in heritage staff whose careers begin through Nazi association and administration, and in attempts by European art historians, museum personnel and curators, and West Germans in particular, to claim place and prestige amongst themselves.

By tracking these arguments and the kinds of internal planning and plotting among museum officials, Savoy also identifies very clearly the shaky foundations of many arguments against restitution still spouted today. Not only are many of these racist, but also Savoy demonstrates the degree to which many of these arguments are based on out-and-out lies. For example, in the 1970s one German museum director, Friederich Kußmaul, cited by Savoy, spouted entirely fictional statistics and made hearsay-based accusations of thefts from African museums—a line Phillips, for example, repeats in Loot as regards hearsay about thefts from the Benin Museum in 1980, and a story easy to corroborate through UNESCO illicit trafficking databases.

Savoy lifts the veil on the construction of an idea of the museum as an institution: as a benevolent custodian of universal heritage, distanced from politicking, lies or corruption and history. Rather, museums have been ruthless in their efforts to retain their hoard and discredit in pernicious ways their African peers. These efforts have been incredibly successful, wearing away at African energies and investments in good faith engagement. They undermined their own structures, such as UNESCO, and left cultural experts and the cultural intelligencia of newly independent African countries empty handed just as Africa’s young nations began to shift away from believing in the potentials of culture that characterised the early days of the Dakar World Festival of Black Arts in 1966 or FESTAC in 1977.

At certain points, Savoy’s historic rendering has an eerie sense of déjà vu, and a kind of sinking feeling of realising that the late 1970s looked much like our contemporary moment in terms of efforts toward and a zeitgeist in favor of restitution. Her book serves as a warning that we have been here before and that last time we lost the battle. But it also serves as a kind of arsenal, to not fall for previous tricks, to expose old lies and to build upon what was already built by so many African and allies over decades. 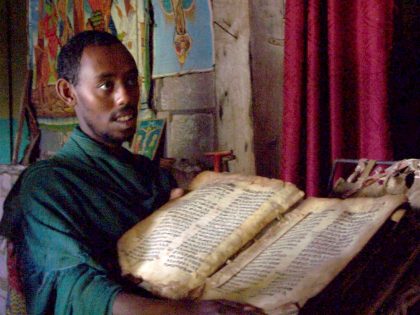 The violence of keeping Ethiopian manuscripts in Western institutions.

The confrontation with France’s slave past

A visit to a museum in a French port city, brings up questions about how slavery is remembered.