Short film distribution and the distribution of African cinema have much in common. Especially notable is the two-pronged issue of production and distribution where independent filmmakers often take years to complete a film—whether a short or a feature—especially when it comes to the postproduction phase of finishing, editing, and bringing the film to the public.

Filmmaking is also about community. Some of the most devastating impacts that the COVID-19 pandemic produced are perhaps best characterized by a profound sense of loss and isolation. For filmmakers and the film industry—well established or not—that translated into shuttered theatres, studio closures, canceled shoots and more. People were streaming, but as film shoots were postponed or canceled, there was no longer space or support for the films that were yet to be made and for filmmakers who would make them. As social beings, we find strength in community. What was needed was a sense of security and accessibility. Instead, in the US, we witnessed the senseless murders of George Floyd, Breonna Taylor, and countless other young people. All of this got Kate Gondwe, a former intern at film distributor Kino Lorber, thinking about the “gatekeeping” involved in the independent filmmaking context. Gondwe is a young independent filmmaker herself and also boasts a background in programming. She was born and raised in Wichita, KS, where accessibility to films like those she and young independent filmmakers were making was limited. Gondwe modestly describes her first documentary film, shot at the age of sixteen on a Canon T3i on one of her regular visits to spend time with her grandparents and family in Dedza, Malawi. In spring 2020, after drawing parallels between the “myth” that American distributors perpetuate regarding the viability of African films circulating in the consumer capitalist market, Gondwe pitched the idea that would launch as Dedza Films later that year. From the outset, the initiative has had clear goals: to support emerging filmmakers, to recognize the “power in community,” and to see “film as part of a larger conversation.”

Dedza Films, with support from Kino Lorber, is a groundbreaking distribution initiative committed to supporting the next wave of emerging filmmakers and communities who are underrepresented, featuring their work at the earliest stages of their filmmaking career—short films. Why the short?

While short films usually mark the entry point into filmmaking, where traditionally the end goal is to make feature-length films, these initial projects are the features of the Dedza initiative, whose mission is to “change the landscape” of film, build community, and collaborate with other organizations who have a similar focus. In the middle of a global pandemic, Dedza was thus conceived and birthed as a tool that could change the perspective on cinema. It’s a clear rejection of “art for art’s sake”; instead, the point is to see “cinema as a tool,” says Gondwe.

Dedza released its inaugural curated collection of nine shorts titled Who Will Start Another Fire on June 11th 2021, simultaneously on VOD and at select in-person screenings across the US along with a limited edition DVD forthcoming in August.

What stands out as exciting and fresh about Dedza Films are the ways its curation process and business model eschew the imperialistic consumer approach to filmmaking and distribution. First, Dedza supports short narrative and documentary independent filmmaking that is thought provoking and real, where filmmakers are not bound to “an audience that controls them.” In this regard, it is refreshing to welcome Dedza’s simultaneous launch of its online editorial component, Dedza Scrapbook, which was created in response to the lack of publicity around shorts and with the aim to offer more opportunity to critics of color to write, as Gondwe puts it, “beyond their demographic.” According to Scrapbook Editor-in-Chief and Vice President of Dedza, Aaron Hunt, it’s about “talk[ing] back and listen[ing] to the voices our industry ignores. Because works by filmmakers of color rarely reach a critical mass of discourse, Scrapbook aims to make humble steps toward embalming underrepresented cinema with underrepresented words.” For instance, Nicole Amani Magabo Kiggundu’s film Family Tree presents a narrative of “deceit and inevitability,” writes Abiba Coulibaly in the Scrapbook, through the eyes of eight-year-old Nagawa (Chloe Kabuye). “By depicting the relatively mundane issue of infidelity, rather than say civil war or famine, Magabo Kiggundu eludes the expectation that stories from this region [read Africa] be mired in overtly humanitarian strife.” In other words, Dedza’s programming spotlights filmmakers who tell “their true story.”

Gondwe describes Dedza’s curation process as being about bringing together films that are in conversation with each other, whose shared themes stand out, and supporting filmmakers whose works are underrepresented, including BIPOC and LGBTQ communities. In the case of this first collection, it’s about “stories that [independent] filmmakers have been making for years, stories that share the common themes of rebirth and memory,” says Gondwe. Indeed, we no longer live in a world of center and periphery. We live in a world where there are multiple centers, where there are often multiple references to home, and where the nation-state is increasingly an obsolete construction; a world that we collectively conceive of as a globe, on which “any point is a center,” as Ngūgī wa Thiong’o observes in his most recent volume, Globalectics: Theory and the Politics of Knowing. The shorts selected for Who Will Start Another Fire amplify this reality.

For instance, part of the selection is Jermaine Manigault’s resonating meditation on collective memory and becoming in his film Not Black Enough. Framed by a clear allusion to the history of black entertainment, the 19-minute short aims a critical gaze upon self-perceptions of Blackness. Writing about this film in the Scrapbook, Martez Warren underscores the film’s message that “being Black is not a monolith that society puts them into when they are born.”

Troublemaker, a coming-of-age narrative directed by Olive Nwosu, evokes the “grimy residue […] left behind” by war, as Sarah John aptly puts it in her reflection in the Scrapbook. The 11-minute film is a meditation on intergenerational trauma whose message, writes John, is about “accepting one’s responsibility in the larger context that they’re tied to.” This larger context is exemplary of how the films and filmmakers of the collection enter into conversation with one another—a dialogue that inspired the curation, according to Gondwe.

For me, the films are also critical reflections on home and belonging through their various meditations on memory, identity, death, and rebirth. Some films evoke the space of home itself as a site which doubles as “death or rebirth,” For instance, in The Lights Are On, No One’s Home, playing the lead role of a trans female protagonist who reencounters her past through memories, writer/director Faye Ruiz, presents a 10-minute tour-de-force reflection “on the effects of loss” in her journey to be reborn, as Horea Abdourahman observes in the Scrapbook. In Peier Tracy Shen’s 15-minute short film Like Flying, we enter the intimate world of child protagonist Ming Ming (Chedi Chang). Ming immerses herself in imaginative meanderings, playing solitary games of charades, dress up and impersonating the rough-around-the-edges adults that inhabit her world. As Alexandra Bentzien observes in her review of the film in the Scrapbook: “The light streaming into a kitchen composed of pastel yellow and pink tones is almost enough to shield Ming from the ugliness lining the stain-littered surfaces affected by abuse and potential alcoholism.” Ming uses play as she reimagines herself through her various memories of home. Overall, the collection truly presents a “mutually affecting dialogue, or multi-logue,” to further evoke Ngūgī’s notion of globalectics, “in the phenomena of nature and nurture in a global space that’s rapidly transcending that of the artificially bounded, as nation and region.”

This initiative will likely gain momentum given the global predilection for short genres, including anything from wildly popular series on TV and streaming platforms to the boom in short novels and books, not to mention social media platforms that specialize in short forms, like Twitter. Dedza Films, however, comes as a breath of fresh air away from mainstream Hollywood genres and industry hierarchies. Open calls for films and no fee for filmmakers to submit their films are part of Dedza’s business model with support for filmmakers channeled through labs and grants and the intent for the future to “discover films through collectives,” unlike festivals which depend on rights revenue and ticket prices. In the end, Gondwe maintains, it’s about “gatekeeping… and it all trickles down to distribution.” Distribution is the act of “pushing a film into the world,” says Gondwe. It is about the process of becoming, not only of a film, but also a filmmaker because shorts usually initiate the latter’s coming into the world.

The Dedza approach has the potential to impact filmmaking and cinema culture more broadly—not only in the U.S. and Canada where the new initiative currently holds rights, but also (hopefully in the near future), in additional countries and regions, and this must include Malawi, particularly in the city and region of Dedza, the distributor’s namesake. To further evoke the country, Dedza Films’s title of its inaugural collection Who Will Start Another Fire was inspired by a question that Malawian writer Jack Mapanje posed in his poem “Before Chilembwe Tree” (1981). Dedza adapts the title by omitting the question mark to turn the phrase, instead, into an affirmative statement about the power of the nine selected films. Dedza is changing the landscape of film distribution—with screenings that even reached a theater in Wichita! We look forward to the next shorts collection and to this initiative’s growth and expansion by young filmmakers whose shorts are sure to start another much-needed fire. 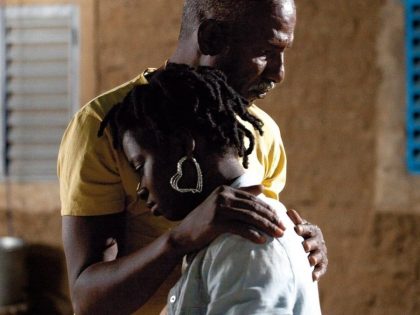 Director Mahamat-Saleh Haroun utilizes the fluid space of the Sahel to demonstrate the power of cinema as a limitless art.