On March 23, 2020, Boko Haram launched an attack on the Bohoma Peninsula, in the Republic of Chad, in which nearly one hundred Chadian soldiers lost their lives. Chad’s President Idriss Déby personally oversaw the response, aptly titled “Operation Bohoma Anger.” The attack was unprecedented for Chad’s military, but the immediate suffering of the region’s vulnerable inhabitants—Lake Chad hosts four riparian states: Chad, Cameroon, Niger, and Nigeria—was not.

Analysts often characterize Boko Haram as a Nigerian movement, which has “spilled over” into neighboring states. This narrative comes up short for two reasons. First: it underestimates Boko Haram’s regional appeal since inception. Second: such language betrays deep rooted norms, stemming from Europe’s post-Westphalian political system, on what it means to be a “state.” It’s inevitable, then, that these statist frameworks constrain possible solutions. Yet, Boko Haram (and its offshoots) is the result of years of state negligence, in other words: absence of the formal state. The marginalization Lake Chad’s residents feel vis-à-vis government capitals reinvigorates cultural and linguistic links that have long superseded colonial and post-colonial borders. The crisis in Lake Chad is much more than a “security vacuum”; it will require less emphasis on military solutions, and increased cooperation among riparian nations at the local level.

Lake Chad, both historically and today, is a culturally contiguous region. That ethnic Kanuris—present not only in Nigeria, but also Chad, Niger, and Cameroon—dominate Boko Haram’s membership is well-known. The Kanuri trace their origins to the Kanem-Borno Empire, specifically the Borno State; in 1884 the Berlin West African Conference divided the Kanuri homeland between the French and English. Even after decolonization, Lake Chad’s inhabitants—whether from Niger, Chad, or Cameroon—often have far more in common with each other than their fellow citizens in Niamey, Yaounde, and N’Djamena.

The trans-national capital of Lake Chad is Maiduguri. Despite falling within present-day Nigeria, the predominantly Kanuri-speaking city has long been home to others. As Alexander Thurston notes, by the 1990s “the city was full of poor migrants fleeing farms, overstretched households, and drought-ridden Niger and Chad.” Boko Haram’s founders, Muhammad Yusuf and Abubakr Shekau, were born in the rural Nigerian countryside. They and fellow migrants quickly witnessed grinding poverty, inequality, and criminality; in other words, state negligence.

The Nigerian state’s consistent inability to respond to these issues—and when it does, the state is often more violent than the criminals—was clear not only to Nigerians, but Nigeriens, Cameroonians, and Chadians. Unsurprisingly, thousands of Nigeriens heard Yusuf’s preaching against the state in Maiduguri, while Boko Haram’s Chadian followers carried his message to Chad’s capital N’Djamena.

Indeed, state negligence was not only an issue in Nigeria’s northeast. For Lake Chad’s other citizens, Nigerians’ woes vis-à-vis the government resonated with their experiences at home. Niamey and N’Djamena, for example, have long proven disinterested—both from a lack of resources and political will—in integrating their portion of Lake Chad. Diffa—a small Nigerien city and flashpoint in the fight against Boko Haram—prefers Nigeria’s naira to the local currency. Residents are “less familiar with [their capital] than with Maiduguri.” Lake Chad’s islands in Chadian territory similarly have little in common, let alone a relationship with, the government in N’Djamena.

It is not surprising, therefore, that some of Lake Chad’s residents see fixed borders, manned by predatory, corrupt officials, and dream of an alternative. Muhammad Yusuf tapped into these frustrations, preaching in 2008 that colonial powers: “carried out hideous schemes based on their wisdom. For example, present-day Niger and the northern part of Nigeria were one territory […] there was no boundary between them. It was all an Islamic territory.” Boko Haram, at least initially, was offering an alternative to the current state—one which reflected more accurately Lake Chad’s realities.

Thus, Lake Chad represents a particularly difficult paradox for policy makers. The area is highly integrated locally, but differences in official language (Francophone vs. Anglophone), institutions—Niger and Nigeria are part of the Economic Community of West African States (ECOWAS) vs. Cameroon and Chad in the Economic Community of Central African States (ECCAS)—and low levels of trade mean the region as a whole is fragmented. As one paper put it succinctly: Lake Chad is “historically far more integrated from a bottom-up perspective than it is from a top-down.” Until this is addressed, Boko Haram, or a different version of it, will continue to exist.

Adding to diplomatic difficulties, the threat of terrorism in the region, from Boko Haram and others, has led to over-militarization at the expense of holistic, regional approaches. Especially with the beginning of the Mali Crisis in 2011, the west and regional states have met the terrorist threat with a “military approach to conflict resolution” typical of our post-September 11 world. Yet, flooding the region with weapons, and arming groups against the jihadi threat, has predictably led to militarized intercommunal conflict, separate from the fight against extremism.

Military cooperation, primarily through the Multinational Joint Task Force (MJTF), is mired in the same lack of trust that affect bilateral diplomatic ties. Nigeria, Chad, and Cameroon all continue to dispute certain territories around Lake Chad. Moreover, each country is in the habit of blaming others for their own militaries’ ineffectiveness. The political temptation to declare others “aren’t pulling their weight” is frustratingly prevalent. The military response—the ultimate state solution—is coming up short.

The riparian governments have long recognized the need for regional integration. The Lake Chad Basin Commission (LCBC), formed in 1964 with Cameroon, Chad, Niger, and Nigeria, and as of 2008 including the Central African Republic and Libya, has made efforts to facilitate conflict prevention through water management, conservation, and regional integration. But even the LCBC cites “neglect of the region by each of the four riparian states” first among obstacles. Moreover, the LCBC itself suffers from weak staffing, lack of capacity, and inability to coordinate with relevant regional institutions.

The Lake Chad Basin Governors’ Forum—representing Lake Chad’s eight regions—in 2019 reaffirmed the need for cross-border cooperation, emphasizing a comprehensive approach to prosecution, rehabilitation, and reintegration of fighters in the region (PRR). This is a start, especially since it recognizes the need to counter Boko Haram’s ideology in Lake Chad. But the four governments must do much more to divert attention and funding from military solutions and focus on regional integration.

First, the four states in Lake Chad should create a regional council, composed of religious scholars and imams, to address youth radicalization. International conferences can emphasize the role Islam plays in bringing peace and stability to the region. In January, Mauritania hosted a conference of Islamic scholars on “The Role of Islam in Africa: Tolerance and Moderation in the Face of Internal Struggles.” The conference sought to harmonize the position of the “largest Muslim ulemas in Africa” vis-à-vis the threat of extremism. Religious scholars in Lake Chad should do the same.

Second, on the economic front, citizens of Lake Chad must be able to cross borders freely, at all times. As many humanitarian organizations have frequently noted, international borders greatly affect food security and transportation costs. Counterterrorism operations result in closed borders that disrupt markets, making food unaffordable for residents and exacerbating conflict. Freedom of movement in Lake Chad would be the greatest counterargument to Boko Haram’s ideology of “false borders.”

In the long-term, local governors in Cameroon, Chad, Niger, and Nigeria must be able to cooperate amongst themselves to tackle problems, free from outside interference from their respective capitals. This means decentralization and greater autonomy for Lake Chad. Decentralization, however, can only be achieved with greater regional unity.

Kwame Nkrumah recognized the importance of African unity 60 years go. In his famous 1963 speech in Addis Ababa, Nkrumah declared: “unite we must. Without necessarily sacrificing our sovereignties, big or small, we can here and now forge a political union based on defense, foreign affairs and diplomacy, and a common citizenship […] We must unite in order to achieve the full liberation of our continent.” Definitions change over time, but Lake Chadian’s desire for freedom from terrorism, hunger, and poverty will always remain a basic requirement of liberation.

Among all these difficult challenges, there is much cause for hope. The crises of which Boko Haram is a manifestation: state negligence, and its educational, environmental, and socio-economic ramifications, are not unique. All nations now face climate change, rising inequality, and unemployment from technological innovation. These are phenomena that no traditional nation-state is equipped to solve.

Cameroon, Chad, Niger, and Nigeria have a chance to tackle these issues, together, at the regional level. If they prove successful in Lake Chad, then they will provide a model for all other nations to emulate. They could, as Nkrumah did 60 years before, inspire the world. 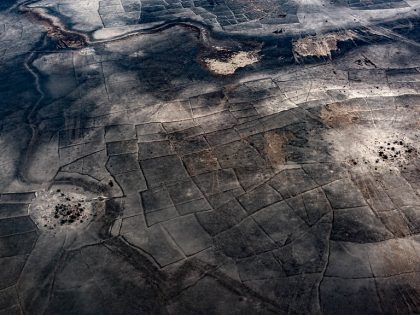