Netflix has landed in Africa! Traveling through Johannesburg’s downtown and suburbs, it’s hard to ignore that indeed, Netflix has arrived. Johannesburg’s cityscapes have been painted with posters, billboards and murals promoting the streaming giant’s first script-to-screen production in Africa, Queen Sono. Netflix partnered with Johannesburg-based production company Diprente, and with creator/executive producer Kagiso Lediga (based in South Africa), to produce this series. It’s a Netflix-Diprente coproduction, with Netflix enjoying streaming rights.

Netflix’s presence allows local film and television to reach a global audience and remedy many of the issues that plague many local productions, namely budgetary concerns. Indeed, it’s hard not to be awestruck by both the scale and creativity of Queen Sono’s marketing or the production value of the series allowed by its budget. The stellar cinematography and production design give vibrancy and life to many neighborhoods and landmarks across Johannesburg, gifting the city a cinematic quality it’s long beckoned for. However, behind the spectacle of Queen Sono which both Netflix and the series spend a great deal of time and effort crafting, lingers disturbing prospects for the future of Netflix’s relationship with South African film and television.

American streaming platforms have spent the past few years in a streaming war, pushing and shoving each other in an attempt to prove who’s really about “great stories” and who’s more invested in “content to support a platform.” (While preparing the launch for Disney+, Disney CEO Bob Iger would go on to differentiate his streaming platform by arguing that “What Netflix is doing is making content to support a platform … We’re making content to tell great stories. It’s very different.”)

It’s a Spiderman-pointing-at-Spiderman meme of various corporations accusing each other of doing the same thing they’re doing. Whoever is to be believed as the true vanguard of cinema, is the platform performing this act best. In that regard, Netflix outshines its competition by an uncontestable margin. It’s an ever-growing entity whose expanse now covers a global scale. The merits of the globalization of film and television bring unprecedented access to foreign content that’s admittedly worth celebrating. While this may be true for content that was made independent of Netflix and subsequently bought and distributed by them, the idea of a “globalized” platform presents hidden obstacles for filmmakers outside of Hollywood.

Netflix’s CEO Ted Sarandos didn’t seem particularly concerned about the overwhelmingly negative reception from French critics to Netflix’s first French script-to-screen production, Marseille. Fortune Magazine writer Michal Lev-Ram observed: “Whether (critics) think Marseille is more merde than merveilleux doesn’t necessarily concern Sarandos (…) What does concern Sarandos is making sure the series ultimately gets more subscribers.” For international filmmakers making content under a company whose ultimate objective is to get as many subscribers across the globe as possible, the style and format of what they are producing will be determined by these objectives and thus whatever is made will likely be the style of form that’s the least offensive to global sensibilities. Since Hollywood cinematic conventions have been entrenched as hegemonic cinematic conventions, the possibility for international filmmakers to work outside of that mold is almost impossible.

It’s the limited imagination of both the showrunner, Kagiso Lediga, and those imposed by Netflix caused by their mutual desire for global reach that results in Queen Sono, a Hollywood spy drama copy-pasted into Johannesburg with a black female protagonist. Adapting Hollywood conventions into African contexts isn’t necessarily a dead-on-arrival endeavor. One of the many charms of Senegalese director Djibril Diop Mambety’s groundbreaking 1973 film Touki Bouki comes from its reconstruction of the Bonnie and Clyde archetype of two young and in love “rebels without a cause” on a rebellious quest for a better future, with Mambety using the archetype as a vehicle for a critique of post-colonial Francophilia in 1970s Senegal.

A similar deconstruction of the Hollywood spy drama is, however, absent in Queen Sono, which trades in stylistic and formal reconstruction for copycatting. The Cold War is where the Hollywood spy drama earned its prominence in the West and in Hollywood, with its themes of international intrigue and conspiracy enticing audiences fearing the threat of nuclear war with Soviet Russia. The genre is primarily a fear-mongering device, embellishing conspiracies against the American state from foreign third forces in order to justify America’s increasing militarism. The conditions that necessitate the spy drama in Hollywood are largely non-existent in South Africa, which makes the presence of a conspiratory Russian crime family as the main villain of Queen Sono almost laughable. Far from a thoughtful reconstruction of the spy drama genre in a South African context, most of the series’ shortcomings come from trying to fit a shoe that simply doesn’t fit.

Queen Sono feels all too familiar, chronicling its eponymous protagonist, Queen Sono, a field agent working for Special Operations Group (S.O.G), an intelligence agency that fights covert criminal operations against the state. The first season follows Queen as she fights new threats to Africa, a private security company from Russia aiming to cozy itself with African leaders, and the additional danger of a growing radical paramilitary terrorist group. She fights these external threats all while undergoing a personal journey to uncover the truth behind the assassination of her mother Safiya Sono, a radical freedom fighter portrayed by the series as a hybrid of Winnie Mandela and Chris Hani. If the synopsis makes the series sound muddied and unfocused, it’s because it is. With six episodes, each running at the 40-44 minutes mandatory for prestige American TV dramas, the writers buckle under the weight of each episode’s runtime. Instead of filling the runtime with nuanced and engaging story arcs for its supporting characters, the writers solve the problem by haphazardly giving Queen more things to do. As a result, many scenes feel insignificant and overstay their welcome, convoluted plot developments force the audience to suspend its disbelief a few inches too high and the majority of the supporting characters feel wasted despite a supporting cast doing their best with very little.

Under the confusing plots and awkward pacing lies a theme that can be found through the storylines. Queen Sono tries to ground the impending influence of a Russian syndicate into African states and the conspiracy behind Queen’s mother’s death behind the message that the failures of contemporary South Africa lie with once freedom fighters who’ve taken leadership positions in government, having essentially sold our country and betrayed their comrades for personal gain. Through this, it tries to examine the scars of a wounded country and its people who’ve yet to uncover the depth of their persistent traumas. Queen Sono’s heart is in the right place and in spite of its execution, the attempt is nonetheless worthy of admiration. However, these uniquely African socio-political issues the series wants to tackle require uniquely African modes of storytelling to meaningfully explore.

In the end, Queen Sono could only be so good. In a world where the show was handled by a more competent group of writers and directors, its potential is still capped by a production company more concerned with how the series will attract its growing global audience than whether or not the series does what it’s trying to do effectively. For South African cinema to grow, and for worthwhile sociopolitical questions to be meaningfully unpacked through our cinema, our filmmakers are required to escape from Hollywood tropes and the prioritization of a global audience. A new language is required. While a part of me hopes to be proven wrong, Netflix isn’t the home for a new wave of film and television Africa deserves. 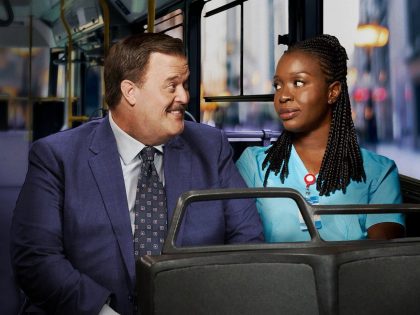 Can an American TV sitcom get anything ‘right’ about Nigerians?

After having a heart attack, a white American falls in love with his Nigerian nurse in the CBS TV sitcom, Bob Hearts Abishola. It is also about Nigerian-Americans’ visibility on mainstream US television.