The annual State of the Nation (SONA) address by South Africa’s president has become a predictable spectacle. South Africans now expect at the very least a disruption of proceedings by some MP’s (at various times, MP’s from the opposition Economic Freedom Fighters have interrupted proceedings or walked out), and at worst fighting between MP’s and parliamentary security (as the EFF has done too). In all of this, the media has been locked in a symbiotic relationship with politicians, as the latter tries to wrestle open a space for themselves on screens, streams, and front pages. The EFF, the third largest party in parliament, have become masters at this game.

This week the EFF was handed a victory from an unexpected quarter—a former apartheid President who, until this week, occupied a marginal place in the post-apartheid South African political landscape.

As President Cyril Ramaphosa was getting ready to deliver his SONA address, EFF leader Julius Malema rose to raise a point of order: The EFF insisted Ramaphosa could not proceed with his SONA speech until F.W. De Klerk, who was a guest of parliament, had left the chamber. De Klerk served as Mandela’s deputy in the new “government of national unity” after 1994 (along with Thabo Mbeki, he was one of two deputy presidents), but he was also the last white president of apartheid South Africa. More importantly, De Klerk has been an apologist for apartheid: on a number of occasions, he has denied that apartheid was a crime against humanity. And as recent as 2012, De Klerk told Christiane Amanpour of CNN, in an interview, that apartheid had been beneficial to its black victims. The EFF also resents De Klerk for not owning up to the actions of government death squads while he was President. The EFF felt it was an insult to South Africans that he was a guest of parliament.

The EFF’s points of order went on for about two hours. For some it seemed like business as usual—all part of the EFF’s tactics to disrupt proceedings and deflect the spotlight away from their own problems, such as the allegations of corruption at VBS Bank in which the EFF had become ensnared. Eventually, the EFF left the chamber. Outside the chamber, journalists shoved microphones into ANC leaders’ faces, demanding to know why they did not support Malema’s demand. The ANC spokespeople (we saw ANC spokesperson Zizi Khoza and the party’s general secretary Ace Magashule) who had microphones pushed in their faces, talked about reconciliation and that De Klerk as a former deputy president after apartheid, was entitled to the courtesy of attending SONA. With the EFF gone, Ramaphosa could continue with what was, in any event, considered to be a lackluster speech. Most people can’t remember what he talked about.

Mainstream commentary initially condemned and ridiculed the EFF’s antics. One reason was that very few people in South Africa care these days what De Klerk does or thinks. He is retired from politics and runs a foundation in his name, that promotes center right political positions and occasionally releases reactionary statements on affirmative action, land reform or democracy, while he makes money on the speaker’s circuit.

It was the media snowball that grew bigger and bigger in the hours and days after SONA that eventually became the most significant result.

When the Speaker, after a myriad EFF “points of order” adjourned Parliament and party spokespeople joined the media in the scrum outside, reporters picked up on the EFF’s talking point: Why didn’t you support Malema’s call for De Klerk to be ejected from the visitors’ gallery? It was clear: the EFF had already managed to set the media’s agenda for them. But even then, it didn’t seem like the EFF had scored any political points. De Klerk appeared to serve as a convenient target for the EFF’s shenanigans during SONA itself. That seemed to be it for this point of order.

What the ANC and media commentators (as well as the EFF) had not anticipated, was that De Klerk would issue a statement the next day that unmasked his unapologetic stance about apartheid and unleashed a national backlash. De Klerk now doubled down on his insistence that apartheid was not a crime against humanity and dismissed it as “Soviet propaganda.” In doing so, he turned what had been a sideshow into the top story.

De Klerk’s tone-deaf response led to a nationwide outcry and ensured that the EFF dominate the media agenda for a whole week and score some political points in the process. A first analysis of social media trends shows the EFF steered online conversations too. Suddenly the EFF was in control of the national narrative, despite the widespread repulsion at their disruptive behavior and racist attacks on political opponents.

By the evening of that same day, De Klerk backtracked on his defense of apartheid. Mainstream write-ups gave credit to Desmond and Leah Tutu for rebuking De Klerk and leading to his about-turn. But this was another example of how well the EFF manages to play the media game. The winner in this whole saga is the EFF.

The EFF’s seemingly puerile disruption forced De Klerk to backtrack on something he has refused to do the last 25 or so years. The EFF could claim that it had started the process that embarrassed De Klerk and exposed him as an unrepentant racist. Who now remembers what plans or policies President Ramaphosa had for South Africa? His speech fades into obscurity except for policy wonks. Which is a shame. Very few people care what De Klerk think these days, but now he was thrust into the center of media controversy and became the barometer of race relations and white racism in South Africa.

As a form of electioneering by the EFF it makes the ANC seem incapable, indecisive and unwilling to take on racism or white supremacy head-on.

What do we learn from this? The EFF, probably more than any other party in South Africa, understands that politics is increasingly mediated, even in a country where voting still largely takes place along race and class lines. They have exploited this very well from the get go: the semiotics of dress (red overalls, berets, their language), strategic walkouts and disruptions at SONA, and the charisma of Malema have captured public attention despite the EFF playing fast and loose with poor people’s aspirations.

For this to work, the EFF needed the media to take the bait, and the media obliged. Under President Jacob Zuma, Malema and his rowdy comrades were a proxy for the questions the media wanted to ask Zuma. The EFF also articulated the nation’s frustrations with an increasingly unaccountable and impenetrable ruling party at the time. Despite their antagonism towards the media (demonstrated a decade ago already when Malema chased out the ‘bloody agent’ from the BBC, and Malema’s deputy, Floyd Shivambu’s 2018 attack on a media photographer), the EFF remains successful in commanding media attention at every turn, benefiting even from negative coverage.

This does not mean that they are liked. It is widely understood that these tactics are aimed at deflecting attention away from their own scandals. During the post-SONA debate, Malema used gender-based violence to score cheap political points. (He accused Ramaphosa of beating his wife). This was rightly been seen as beyond the pale. (It is ironic that when the ANC MP’s accused Malema of the same thing, he threatened to sue one of them and walked out of parliament in a huff.)

South African politics is now highly mediated (playing out on social media) and strikingly visual (defined by the politics of spectacle). Insisting that parliament returns to a cool, calm and collected rational debate is unlikely to change this style of politics. Like elsewhere in the world, populist politicians like Malema command the media’s attention even as they criticize and revile them. How ironic then that the last white leader of a minority racist regime was the one who ensured a victory for the EFF. And, irony upon irony, these deflection tactics are peddled by a party claiming to represent the poor and the workers, to further their own interests. They have just emphasized the need for a true democratic socialist alternative and a more proactive rather than a reactive media. 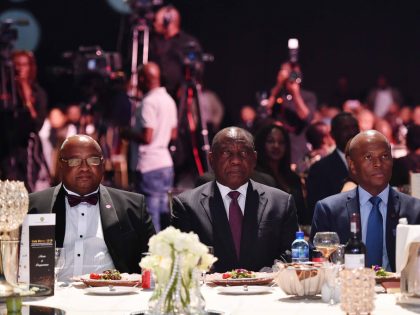 Economies are broken everywhere, but while the rest of the world considers the radical, South Africa resigns itself to the rational. 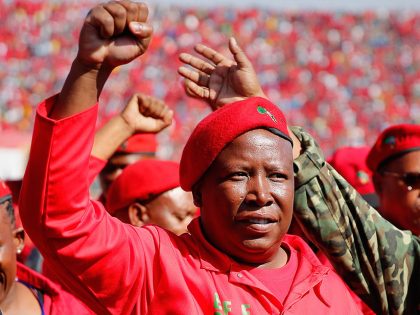