On September 21st, thousands of protestors led by high school activists, marched in Cape Town in support of the international climate strike. The strike was part of an international movement led primarily by young people to call on world leaders to take radical action to halt the climate crisis.

The Cape Town march was in many ways a significant and positive action. Organizing efforts by the African Climate Alliance (ACA), a coalition of student activists supported by various organizations and civic movements, realized a turnout of over 2500. To the best of our knowledge, it is one of the largest environmental protest actions in South Africa’s history. Crucially, unlike the majority of environmental actions before it (excluding the two previous climate marches in 2019), participants came from throughout society. A significant component were the students themselves, but various community activists were present as well. Inputs from the stage were also encouraging. Emile Jansen of Black Noise was particularly good, articulating a political message of people versus corporate interests, whilst also producing a great hip hop performance.

However, the march also revealed the left’s lack of, and weaknesses in, organizing around the climate and ecological crises. In particular, that we have yet to ensure that the movement to end the climate crisis is rooted in the working class and is anti-capitalist in nature. While there were a number of radical messages at the march (the simply put, “capitalism is a fuck” for example), the vast majority appeared to locate the climate struggle firmly within a neoliberal paradigm in which it is only our individual consumption patterns that need to change. Signs like: “veganism is the future” and “no no plastic” as well as a proliferation of flower crows and hippie signs illustrate that, at least in Cape Town, the climate change movement is still rooted in liberal or “lifestyle” environmentalism. The former was described in a recent article by Jessica Green in Jacobin as the widely accepted notion that capitalism and environmental protection can happily coexist with the commodification and financialization of nature through things like “eco-labeling and pollution markets.” Liberal environmentalism, Green goes on to state, “emphasizes voluntary approaches, public-private partnerships, and, of course, markets, in lieu of government regulations.” It also tends to emphasize changing consumption patterns at the level of the individual, often resorting to moralizing arguments around, for example, meat consumption or plastic straws.

There are serious implications of understanding the climate crisis in this way, but they largely amount to the same thing: they will not bring about structural and widespread change both in relation to halting the ecological crisis and in attempting to transform our society into a just and equal one. In the same Jacobin piece, Green shows how carbon-pricing, for example, “tinkers at the margins” while doing little to reach levels of decarbonization that we require. Similarly, while we should all be recycling what and when we can, we will not rid the oceans and rivers of plastics until we take drastic action in relation to global plastics value chains and ensure that we roll out major recycling programs for industry as well. Moreover, the costs of these should be borne by the industries in question who for too long have been able to externalize the impacts of environmental degradation to government’s and communities. Countries like South Africa cannot afford to be further ravaged by neoliberal policies that entrench our already deep socio-economic problems. This point was driven home in an excellent article in Catalyst by Matt Huber. He notes that, “under neoliberalism especially, the bulk of the population [the working-class and poor] does not feel guilty or complicit in their consumption, but constrained by severe limits of access to the basics of survival.” Not only is there a moral- and indeed empirical- problem with placing the source of blame on individuals, especially the poor and working class, but such an approach will not build the kind of mass movements needed.

Rather, we need to develop what Huber calls a “working-class ecological politics.” This involves ensuring that tackling the climate crisis also tackles the social crisis. Already, we are seeing the potential impact of not doing so with the threat of what has been dubbed “eco-apartheid” or “climate barbarism,” a system where elites are able to escape the brutal impacts of climate change, while the vast majority of people are confined to increasingly uninhabitable areas or forced into precarity as “climate refugees.” Leaving the resolution of the climate crisis to “the market” cannot generate rapid enough decarbonization. It will further leave the majority of the world’s population worse off, and further entrench inequalities.

This scenario is not some distant future. Cape Town recently experienced one of the worst droughts on record. Residents’ water supplies were rationed, and they lived under a months-long threat of “day zero”; the day when the taps would run dry. But not all residents were affected equally. The wealthy bought JoJo tanks, drilled boreholes and stocked up on bottled water. In some middle-class offices, people were also preparing to work from other cities in the country. These options are not available to those struggling to make ends meet, confined to low-wage jobs or unemployment and often living in areas where no water quickly turns to an epidemic. While the drought in the Western Cape appears to have broken, droughts in the Eastern and Northern Cape continue. South Africa is a water-scarce country and these climate shocks are likely to get worse. Floods in KwaZulu-Natal and devastating cyclones in our neighboring countries further illustrate our vulnerability to climate shocks.

Despite the immanent threats, almost none of our political parties understand the need to transform our economy in line with the urgencies of the Intergovernmental Panel on Climate Change’s (IPCC) latest report. We have a mining and energy minister who trumpets “clean coal” and our energy utility, Eskom, is one of the worst CO2 emitters in the world. The government also remains committed to the (long-overdue) construction of two of the largest coal-fire power stations in the world, Medupi and Kusile. When the government should be investing heavily in renewable resources, it seems happy to leave these up to independent power producers. In a recently released working paper, the South African Treasury even appears to make reference to introducing independent water providers. Our solar radiation potential ranks as third in the world, and our wind potential is not far behind. The abundance of these resources should not be controlled by a few.

Coupled with the climate crisis is the persistent scourge of inequality and mass unemployment. Within this context, the left appears thoroughly unimaginative. While there are some notable exceptions (for example, the work done by COPAC, AIDC and the One Million Climate Jobs alongside rural activists in Xolobeni and other mining-affected communities), for the most part, there is nothing close to the radical type of policies put forward under the banner of a Green New Deal in the UK and the US. Where radical policies are being championed, they are yet to receive mass support. The lack of action, and even denialism by labor is particularly worrying.

However, it doesn’t need to be this way. The climate crisis presents a unique opportunity for the left in South Africa to move away from the dogma and stale program that limits our imagination to the politics of the second-half of the 20th century. There are now countless global examples envisioning what a better world can look like that are using the climate crisis to argue for radical change. The South African left can use this historical moment to bring about the unrealized promises of the transition. The promise of a wage-led industrialization makes this transition all the more politically feasible in gaining the support of a very weary labor. But in order to do that, we have to also go back to some good old-fashioned strategies: conscientize and organize.

Recently, we have been a part of- to varying degrees- popular and political education on climate justice. Some of this has involved running a course for young climate activists from high schools across Cape Town. In the last workshop of the course, we focused on what it means to be an activist. This involved a presentation by Zackie Achmat in which he shared his experiences with the Treatment Action Campaign (TAC) campaigning for the South African government to acknowledge the AIDS epidemic and to provide ARVs. There are many parallels between that fight and the fight against climate change including the presence of embedded commercial interests, denialism and a reluctance on the part of government to take what appear to be obvious common-sense actions in mitigation of the problem. It was only through mass political action around a clear project for the provision of ARVs that finally began to tackle the AIDS epidemic and even greater mass mobilization is needed to fight climate change.

However, the comparisons are limited—the climate crisis is both much starker and more nebulous with its solutions complex and multifaceted. It will require the complete overhaul of a global economy addicted to burning fossil fuels. The essential task of every activist in either struggle however, begins with understanding and then explaining the science underpinning them. But there are great challenges in this. Already alienated production under capitalism, is further alienated from the nature which it exploits. Further, despite South Africa’s incredible biodiversity, most people are completely separated from it due to economic or physical barriers. Finally, the climate crisis is often made to compete with existing and what appear to be more pressing crises such as poverty, unemployment or gender-based violence. This is why the science that is taught needs to be truly relational in that it shows the way in which the destruction of the natural environment is deeply embedded in the capitalist system with the capitalist class primarily responsible. Again, Huber puts it well, arguing, “this form of analysis would yield a politics based on conflict and an inherent antagonism between capitalists and the mass of society over ecological survival.”

In order to mobilize people around these actions we need two things: a clear program of demands and a political education campaign that ensures all constituents understand how their immediate needs (housing, public transport, job security) are linked into the broader struggle against climate change. There are also a number of positive lessons that we can use in building movements in South Africa under the framework of eco-socialism. Movements to both ensure that we are able to decarbonize, but also drive a transition that allows for the kind of radical transformation of society that we need, one that ensures equality and builds true democracy. 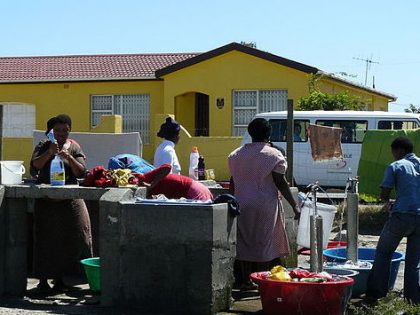 Large parts of Cape Town have always been like cities elsewhere on the continent, and not an exception.