In Kwame Nkrumah’s Neo-Colonialism: The Last Stage of Imperialism, published in 1965, he wrote: “Military aid in fact marks the last stage of neo-colonialism and its effect is self-destructive.” At the time, Nkrumah—who blamed the CIA for the coup that led to his ouster as president in 1966 and for his subsequent exile–could not have envisioned American and Ghanaian soldiers eating python meat together in the forests surrounding Akim Oda, Ghanaian troops engaging in maritime and jungle warfare training with the US Navy or the country’s custom officials being trained by US Marines. Least of all, that Ghana planned to grant “unimpeded access to the United States to deploy troops and military equipment” in the country.

Initial reports suggested the US planned to build a base in Ghana. News of a possible US base swept local media on March 20, 2018, spurring controversy across the country. The private Joy News first reported that Ghana had entered an agreement allowing the United States to build a base for the US Africa Command (AFRICOM) in the country. The US Embassy in Accra, AFRICOM, and Ghana’s Minister of Defense, Dominic Nitiwul, quickly denied the claims. “The Americans are not setting up a military base,” Minister Nitiwul told reporters, but, he added, “We should be grateful to the Americans for spending their hard-earned resources to come and upgrade our soldiers.”

It’s long been thought that AFRICOM desired a more permanent base in West Africa, as the Gulf of Guinea was one of the command’s initial targets. For years, observers wondered if Ghana would play host as a relatively stable and peaceful democratic country. Situated along the oil-rich Gulf of Guinea, its location is supposedly ideally suited for soldiers to deploy to hotspots in nearby places like Niger, Mali and Nigeria.

But is the US military really setting up a base in Ghana? Here’s what we know:

AFRICOM, one of the US’ six regional military commands, was established in 2007 by President George W. Bush. AFRICOM is officially based in Stuttgart, Germany, with one official outpost – Camp Lemonnier – in Djibouti (Liberia was the only other African country that offered to host the base; AFRICOM declined). However, over the past decade, AFRICOM has slowly increased its creep throughout the continent, establishing agreements with countries like Ghana, Kenya and Senegal to use airfields and bases to refuel aircrafts, deploy troops, and conduct surveillance operations. These sort of technical agreements and outposts are what anthropologist David Vine and others refer to as “lily pad bases.” Basically, “…small, secretive, inaccessible facilities with limited numbers of troops, spartan amenities, and prepositioned weaponry and supplies.”

Recent reporting suggests there are about two-dozen lily pad bases across 20 African countries.

At least one such base is in Takoradi, Ghana’s “Oil City” (and home to US companies Halliburton, Kosmos Energy and soon perhaps, Exxon Mobil), where AFRICOM has access to deploy “rapid reaction forces… across the continent.” Additionally, AFRICOM hosts courses at the Kofi Annan International Peace Keeping Training Center in Accra. It also holds joint-trainings with Ghanaian security forces, and conducts “humanitarian” missions. In 2013, AFRICOM, USAID and the Peace Corps partnered to open the Nkwanta Nutritional Rehab Center in Ghana’s Volta Region to “improve the health and prosperity of children.”

In other words, AFRICOM is already integrated into Ghanaian military and security spheres.

Speaking to reporters on March 20, Minister Nitiwul denied the construction of a base, but confirmed American military presence in the country: “Last year we had over 200 American soldiers passing through here to work with us… they have an airplane that is already in Ghana.”

The agreement in question—what is known technically as a “Status of Forces Agreement”—allows the US military (and its civilian and contractor force) to have “unimpeded” access to already existing facilities, which may be appointed either for exclusive or joint use for the US (and Ghana). The US will control entry and have “priority access” to these facilities, but Ghanaian forces will be tasked with keeping the areas secure.

Where are these facilities? The leaked agreement does not say, but speaking to the media, Minister Nitiwul said “it’s just around the airport area,” presumably Kotoka International Airport in Accra and/or the Takoradi airport. Within these facilities, the agreement allows for: “training; transit; support and related activities; refueling of aircraft; landing and recovery of aircraft, accommodation of personnel; communications; staging and deploying of forces and materiel: exercises; humanitarian and disaster relief.”

While such an agreement may not legally denote the construction of a base, the agreement certainly appears to strengthen Ghana’s status as a lily pad base for US forces. For many Ghanaians, this is a technicality, as for them, any foreign military boots on Ghanaian soil are a cause for concern. Some point to recent militant attacks in Burkina Faso, Ivory Coast and Niger and fear that a US presence will actually make Ghana more vulnerable to terror threats. “Ghana will be opening itself up to all kinds of terror forces if the government allows the presence of U.S. military,” said Ghanaian activist Nii Ayertey Aryeh. “We should be working tirelessly with our neighbors and the rest of Africa to make our economies strong and not being a concierge for US interests.”

The agreement is already causing political controversy and unrest in country.

Though AFRICOM has received bipartisan support from both of Ghana’s major political parties, the National Democratic Congress (NDC) has used the agreement to attack the ruling National Patriotic Party (NPP). Muntaka Mubarak, Minority Chief Whip for the NDC called the agreement “recolonization.” In a stunning display of state force, Koku Anyidoho, NDC Deputy Secretary General, was arrested and charged with treason after suggesting Ghanaian President Nana Akufo Addo would be overthrown in a coup for signing the agreement. Former President John Mahama, under whom the US and Ghanaian militaries conducted multiple trainings, secured Anyidoho’s bail.

Following the detention of Anyidoho, the NDC subsequently scheduled a street demonstration on March 28. Around 3,500 people took the streets of Accra, causing massive traffic jams and holding signs that read, with a nod to Trump, “shithole government,” “U.S. military base in a shithole base = corrupt leadership,” and “Akufo Addo return the bribe.”

However, given the NDC’s previous cooperation with the US military, their opposition seems to be more politics as usual than a sustained ideological critique.

The Economic Fighters League (the Fighters), a social movement “mobilizing Ghanaians for economic freedom,” called for protests at Parliament the day MPs debated the agreement.  “The NDC … is engaged in nothing but political opportunism calculated to take advantage of the genuine anger of the people against the obnoxious Ghana-US security agreement,” Hardi Yakubu, Fighter-General of the Fighters, said of the NDC’s widely publicized outcry. Yakubu and supporters were denied entrance to Parliament House, but protested outside the entrance.

In addition to the Parliament protest, the Fighters are throwing their weight behind multiple lawsuits contesting the US-Ghana agreement.

“Per the agreement,” Yakubu said, “Ghana can be used as a base to launch attacks on other African countries. That’s unacceptable in the context of Pan-Africanism.”

Actions like the Fighters protest are a part of a constellation of every day nuanced, widespread debates that are happening at the grassroots level. In the days that followed the March 20 news break, messages urging resistance to any US base – permanent or not – circulated on WhatsApp and Ghanaians tweeted directly to Ghanaian President Nana Akufo Addo asking whether military aid counts as part of his Ghana Beyond Aid campaign, which sorta predicted this policy direction and has criticized for being mostly all talk and little action or direction on how to get there.

The outcome of this newest US-Ghana military agreement remains to be seen, but it seems certain that as AFRICOM continues to expand, so will resistance to its presence.

The tyranny of distance, up close

The larger story of the United States’s rapidly expanding military interests and presence on the continent. 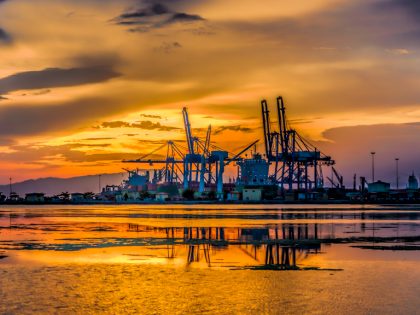 The deal with China’s new military base in Djibouti

When are African states establishing joint military bases to secure trade routes or fight off piracy instead of diversifying the source of foreign influence on their territories?

Recent revelations, which have always been suspected, have strengthened the United States' role in the Liberian civil war, adding fuel to claims of American intervention in Liberia since its founding as a Western style nation-state.
12.20.2010