In January this year Lucas Mangope – one of the most notorious Bantustan leaders in South Africa – died at the age of 94.

From 1977 to 1994 Mangope had been president of Bophuthatswana, one of the ten parallel “ethnic states” set up by the apartheid regime to indirectly govern South Africa’s black population. The Bantustans – or “Bantu Homelands” in the official parlance – were unanimously condemned by the anti-apartheid movements as a cynical attempt to try sell the segregationist project to the black population. By stripping black South Africans of their citizenship and forcibly removing them from “white” South Africa, the apartheid state used the Bantustans as a dumping ground for reserve black labor. At the height of apartheid, black South Africans had to have a work permit or special dispensation if they resided in the white cities, while for many their families were confined to the impoverished Bantustan territories.

Mangope was known for his violent reign, his social conservatism, and his ethnic chauvinism. In March 1994, he joined forces with former generals in the South African army and a white right-wing paramilitary group — the neo-nazi Afrikaner Weestandsbeweing (AWB) — to try protect Bophuthatswana’s “independence” and spoil the upcoming democratic elections. But a popular uprising coupled with a rebellion by soldiers in the Bophuthatswana army led to Mangope’s removal from power and the relatively smooth incorporation of the Bantustan into the new North West province in late April 1994. Mangope remained active in politics after the collapse of apartheid, forming the United Christian Democratic Party in 1997 and securing representation in both the national and provincial legislatures. In 2012 however, Mangope was expelled from the party, accused of being too autocratic for a democratic South Africa.

Despite Mangope’s role in propping up the apartheid regime, a surprising number of South Africans, especially in the North West, recalled the infamous autocrat with unexpected fondness at the time of his death. The public broadcaster, the SABC, reported that Mangope was remembered as “a visionary, punctual, organized and meticulous,” while one Twitter user commented that Mangope “left something for [his] people which the ANC destroyed [in] under 5 yrs.” Even Dikgang Moseneke, South Africa’s former deputy Chief Justice from 2005 to 2016 (and a former political prisoner on Robben Island), was quoted as saying of Mangope that “(n)o leader is perfect, but we must recognise true and great leadership…”

There has been equally surprising nostalgia for other Bantustan leaders.

Most recently, when Mangosuthu Buthelezi, the former Chief Minister of KwaZulu, stepped down as the head of the Inkatha Freedom Party (IFP) in October last year, good wishes streamed in, whitewashing his role as the architect of some of the most horrific violence in the dying days of apartheid. Even Bantu Holomisa, a former Transkei general close to the then underground ANC, praised Buthelezi. When Buthelezi retired, Holomisa wrote in a newspaper column that Buthelezi “was the last of our moral leadership.”

It is hard to square these memories with the well-known historical facts about the oppressive regimes in the Bantustans. For example, Venda (where the family of South Africa’s new president, Cyril Ramaphosa, is from), was a one party “state” that routinely imprisoned political dissidents without trial. There was no freedom of speech or association in Ciskei, in the current Eastern Cape, and there were several instances of the army killing protesters and torturing activists. Much of the violence in the Bantustans was entrenched and bolstered by the unfettered power given to chiefs, many of whom were installed at the behest of the apartheid government or by its British colonial predecessors. They kept a close watch over their subjects, while extracting self-serving levies and reporting on all those who refused to pay.

Though some Bantustan leaders were more progressive than others – Enos Mabuza of KaNgwane for example, led a delegation to meet the ANC in exile – the Bantustans were a  vital cog in the machinery of the apartheid state. But Mabuza — or Transkeian leader Bantu Holomisa, who harbored Chris Hani and a band of ANC guerrillas when they illegally entered South Africa in the late 1980s — were exceptions.

How then do we explain this particular Bantustan nostalgia that many South Africans seem unable to shake off? Nostalgia, in many ways, has far more to do with the present moment than the past, and for some residents of the former Bantustans there is a sense of disappointment with the failures of democratic South Africa. Criminality and a widespread sense of precarity and insecurity characterize the lives of most poor, black South Africans. To many, the Bantustans represented spaces of law and order – albeit repressive and patriarchal law and order – that contrasts with the tumult of the post-apartheid world. As the acclaimed scholar of Xhosa history, Jeff Peires notes about the former Transkei, “the old [Bantustan] government structures were corrupt and inefficient, but a bribe in the right place could always get your road fixed in time for a wedding or funeral.” The rules for getting ahead in democratic South Africa are often fairer in theory, but more opaque in practice. While many of the former Bantustan patronage structures remain intact at provincial level, they are now overlaid with ANC networks and decades-long gender and generational struggles that have rewritten much of the older social order.

For others, the Bantustans represent a powerful ethnic nationalism that offers a sense of belonging. Based on the fiction that South Africa was made up of ten different black ethnic groups, whites, coloureds and Indians, the Bantustans derived much of their legitimacy through appeals to ethnic specificity. In recent decades, as the anthropologists Jean and John Comaroff have argued, ethnicity has become an increasingly commodified identity marker, often functioning as a powerful tool to make claims on resources such as land and mineral rights. For example, the Bafokeng chieftaincy in the former Bophuthatswana, are not only an ethnic community but a corporate entity, with their own sovereign wealth fund, Royal Bafokeng Holdings (RBH). Under the leadership of the Bafokeng chief, the Royal Bafokeng Nation have equity in mining companies that operate on Bafokeng controlled land, making them one of the most important players in South Africa’s volatile platinum industry. For young and old South Africans alike, the Bantustans then are an easy reference point to a time when ethnic differences were institutionalized and regulated in the political sphere.

And it is worth noting that the Bantustans were also important incubators of a small black middle-class. Politicians, administrators, chiefs and civil servants came to rely heavily on the Bantustan “state” for their class and social position. In some Bantustans like the Transkei, the large majority of this middle class aligned themselves to the liberation movement. But in Qwaqwa and some of the other smaller Bantustans, where politics and economics configured quite differently, many civil servants felt loyal to the status quo. Though most former Bantustan civil servants were incorporated into the new post-apartheid state and their wages increased, they were also required to pay higher taxes, lost some of their more extravagant benefits and arbitrary powers, and often felt overlooked by the new ANC government. To these South Africans, though they have continued to do relatively well in the post-apartheid era, the Bantustans represent a time of easier career advancement and prestige.

Paradoxically however, it is probably the ANC that has been the most influential in sanitizing the Bantustans and their leaders. As apartheid was unravelling, the National Party worked hard to cement support from their chiefly allies in the Bantustans and the ANC was nervous about how this would play out at the ballot box. They were particularly concerned about the ethnic rivalries and gruesome violence that gripped KwaZulu and Johannesburg, engineered partially by the apartheid state, the Zulu King and Buthelezi’s IFP. In an attempt to prevent civil war and the derailing of the elections, the ANC brought many of the Bantustan leaders and chiefs into the fold, offering them regional power in exchange for peace. Continued chiefly control in the immediate post-apartheid period thus required selective forgetting of the role of Bantustan leaders in the apartheid project.

The ANC continued to prop up chiefly power throughout its reign, partially because chiefs still deliver the rural vote to the party and partially because they have access to resources of value to many ANC officials. The attempts at passing pro-chiefly legislation — such as the the Communal Land Rights Act — is a clear indications of the ruling party’s desire to further empower chiefs by entrenching static forms of land ownership that conform to the tribal boundaries of the Bantustans. Under Jacob Zuma’s presidency, this trend intensified even further as Zuma relied heavily on the support of chiefs in the former KwaZulu to maintain his power.

While public opinion in South Africa has been divided on whether Bantustan leaders such as Mangope deserve any praise, to simply dismiss this debate as a failure of memory is to ignore the complexity of South Africa’s past – and, perhaps most importantly, its present. The Bantustans have layered histories and enduring legacies and it is only by grappling with these that we can begin to understand contemporary South Africa, and the seemingly peculiar phenomenon of “Bantustan nostalgia.” 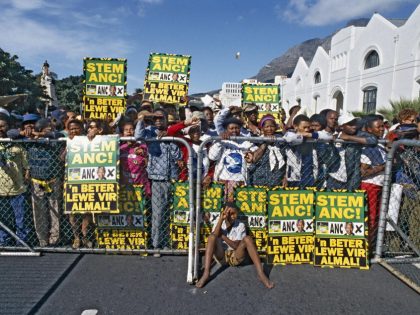 The clamor for a ‘credible opposition’ in South Africa?

William Gumede, who wrote a book about the ANC, makes a strange and careless argument–without recourse to evidence–about the ruling party’s fortunes.