On 27 June 2015, I went to check out the launch of PLATINUM, a mini-publication by photographer Jason Larkin and writer Jack Shenker. It’s a combination of large format posters and “an incisive, wide-ranging essay”, the combination of which explores “the build up to and implications of one of the most critical events in South Africa’s recent history.”

The timing was interesting. I got the launch invite on the same day as the surprise announcement that the country’s President, Jacob Zuma, would be releasing the Marikana report. This happened a few days after the most recent of his “injudicious comments,” in which he stunned students at the Tshwane University of Technology when he said that the striking miners had been killers before they were shot on 16 August 2012, referring to the killing of 10 people ahead of the police-led massacre. While it’s crazy that he addressed the students on the deaths of the miners as families were still waiting for the Farlam Commission’s report, even more outlandish was this comment: “Do not use violence to express yourselves, or I might be forced to relook at the apartheid laws that used violence to suppress people.” Haai man. Either he was riling the crowd in preparation for the report’s release (naturally, Julius Malema had to express that he is “flabbergasted” by these comments) or it was just plain irresponsibility that led Zuma, once again, to be in contravention of expected presidential decorum. Both are plausible options I guess, but I digress.

I had wanted to check out the new Fourth Wall Books space in Braamfontein— the company publishes beautifully designed and written books on art, architecture and photography—so I braved the cold and the hit the streets. I could not find parking anywhere and was confused by the queue snaking down and around Smit Street outside AREA3. Turns out it was the launch of Adidas’ YEEZY BOOST 350. Adidas was kind enough to even the playing field in the race to attain a pair by allowing customers the chance to win tickets to buy the exclusive new shoe, and people obligingly lined up to get raffle tickets.

Ironically enough, the book launch got underway with talk of queues. After a welcome by the editor, Bronwyn Law-Viljoen, the photographer Jason Larkin (British, internationally recognized for his long-term social documentary projects, lived in Johannesburg from 2011-2013) discussed how what most struck him about his time developing this work was the sheer power behind numbers of people, queuing to affect change. He described the incongruence of pylons and power lines of people, queuing to march and to work, queuing for electricity and for water. There seemed to be some romantic attachment to this image of thousands lined up; I got the impression of a latent wistfulness for a magical shot reminiscent of those first-ever-election photographs. Ja ne foreign photographers huh?

Luckily I had seen another one of his photo series, called Waiting, motivated by “an ever-present sense of people waiting: waiting for jobs, waiting for opportunities, waiting for politics to effect change.” Having this insight into his greater body of work, I appreciated how these sentiments were transposed into the capturing of unconventional Marikana moments—his images of literal public expressions of waiting with patience and pangas. Again, those ever present pylons powering mines in areas where communities have no electricity: somehow, those inaccessible power lines seem to be in tune with the suspended sense of anxiety hovering over the mines, and the nation.

That this photographer conveys anxiety and palpable violence with subtlety is something I can empathize with, and more seriously, appreciate for not being too graphic. Blame this on police brutality fatigue; it is certainly overwhelming to be constantly and visually reminded of the tragedy and horror and bloodshed that I have now come to associate with the mines.

The series is worth engaging with for the simple fact that it displays in pictures the suspense of suspended development in the platinum industry. The faces of people stuck in these time warp spaces are vast, and with hundreds of expressions on a single A4 sized print, reminiscent of trick collages I remember seeing in a magazine where you had to squint to see the hidden graphics. In this case, I would guess that the hidden visual here is the hypothetical shadow hanging over the mining families’ futures.

This brings me to the publication style itself and the idea of “breaking with traditional format.” The photos are displayed back to back on four posters, neatly tucked into a cardboard cover with the essay printed in a little booklet in the middle. My companion, brimming with sarcasm, was like, “Ya, because everyone wants to put up a poster of the marching miners on their wall.” Miners would totally make the best magazine centerfold, said no one ever. The novelty is cool, but I eye-rolled a bit at the R150 price tag. Luckily, it turns out that they have 500 copies for sale and 500 for free for communities in the Marikana area. That’s cool, and reason enough for me to have purchased one. It usually irks me when foreign correspondents produce and disseminate their best work amongst people who will never get to consume it, poverty porn blah blah, but this is a notable exception. The essay is available in English and Xhosa, and given that the cost of translation is one of the biggest expenses in the publication cycle, this a commendable gold-star was what got me like YASSSS Fourth Wall Books, I’m so down with you for this.

Speaking at the launch was Chris Molebatsi from the Marikana community and David van Wyk from the Bench Marks Foundation. Their description of life in Marikana right now, discussion about the issues faced in the aftermath of the massacre, and the insights given into the relationship between mine management and miners and the greater communities surrounding them, was quite eye-opening. How crazy is this: apparently Lonmin’s response to supporting the widows of the slain miners has been to house them in hostels and employ them, thus preventing them from talking to the media. That made me think about the phrase “corporate social responsibility” in a whole new light. While lives have not changed much in the three years since the massacre, the political space has opened drastically, communities are mobilizing, and trying alternate methods of engagement with both mines and government on a variety of issues ranging from environmental issues to women’s rights.

The essay introducing the images, by writer Jack Shenker, is wide-ranging, peppered with details about the lives of real characters like music-loving Thembisa who works in her aunt’s shebeen in Nkaneng settlement, and Lungisile, a Lonmin rock drill operator who was gifted with a limp and a bullet in the brain courtesy of the SAPS. It is too dangerous to de-lodge it from his skull; he now has to live with the threat of it imploding for the rest of his life. And he’s one of the lucky ones to have lived – he missed his colleague’s funerals during his post-Marikana months in hospital.

Shenker is comprehensive in his descriptions of the area, the people and the political framework that gave rise to the events. The essay concentrates on the boundaries between material corporate interests, responsible policing and “the co-dependent comfort zone of economic privilege that has benefitted a narrow strata of the new South Africa and excluded the majority.” This analysis is not exactly incisive or groundbreaking, but valid nonetheless because of the importance of reiterating questions that arise from accepting life-as-we-know-it. As Catherine Kennedy, director of the South African History Archive, notes, “as a species we are teleological – we make sense of ourselves, and the world around us, through storytelling”; she proposes that Marikana forces us to ask who wrote our rainbow nation’s epically romantic democratic transformation, and how much of it is true.

The real value of Shenker’s essay, however, is how succinctly it locates the massacre into broader neoliberalism-discontent discourse. After Pinochet’s Chile and Thatcher’s Britain, he suggests, “neoliberalism has undergone a process of democracy-proofing that reached its zenith in South Africa.” No longer a theory or ideology, it has come to be an “uncontested reality” leading to the “hollowing out of government sovereignty in neoliberal states, so that popular demands for social justice become impossible to implement.” Tracing the progress of direct imperialism, colonialism and racial domination to how “liberation as political, social and economic empowerment for the masses had morphed into liberation for market forces” is invaluable, and cannot be stressed enough. In this global context, disappointment with the ruling party is somehow mitigated by the reality that “the consequence of South Africa’s neoliberal turn was that democratic freedom, even as it was being feted across the planet, arrived with enough manacles to preclude any meaningful opportunity.”

But what now? If South Africa is living out “the rational destiny of market fundamentalism”, with its prerequisites of gross inequality and mass murder, what is the next step when “democracy gets filtered through the prism of neoliberalism?” Shenker tracks “The Rise of the Marikanas”, focusing on the potential of determined workers movements, with the triumph of the 2014 AMCU wage strike (where workers successfully reached the R12 500 salary demand) as an illustration of just how important victory can be – “because it will affect whether other workers have the confidence to challenge the mass inequality and injustice that exists in South Africa.”

Amidst the shock, horror and trauma of the political developments on the platinum belt, Shanker’s viewpoint is a take on things that I hold in high esteem. Too often, the manifestation of a struggle is hyped up more than the potential it holds and Shenker is right on the money for pointing out that while the rash of revolts sparked after Marikana are not (yet) united, the anti-apartheid protests were similarly fragmented before knotting together as a popular movement that hauled down the system from within. The essay ends with perhaps one of the greatest takes on the trauma that was Marikana:

Perhaps South Africa, in a manner few could have predicted when apartheid came to an end more than twenty years ago, may yet prove to be an inspiration far beyond its borders once again.

It stands to reason that if South Africans once overturned an obscene system of entrenched racism, yet the outcome of that struggle left a bitter taste in the mouths of the masses, then exploitative capitalism may well be the next big thing to be ceremoniously usurped. 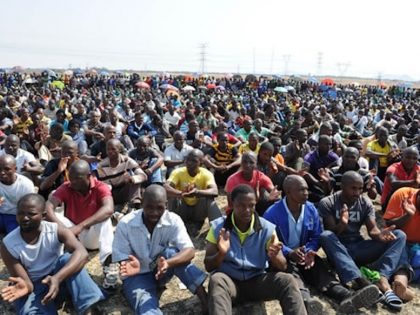 The Spirit of Marikana

Marikana’s workers were active agents in controlling their own destinies in the midst of plutocratic mine-owners and “pocket trade unions.”