Kushn is a chic, afro-futurist fashion and design store based in Cape Town. Owners Greer Valley and her husband, Themba Mntambo, started the company three years ago using leather and colorful woven cloth sourced from textile co-ops in Ethiopia and Ghana. The store’s name is a play on the kingdom of Kush – which was situated in what is now Sudan, going far back as 1070 BC. But don’t mistake Valley and Mntambo’s designs as an homage to an ancient past.

Instead, their designs – while referencing the innovations of past African greats and looking to the techniques that have served artisans, artists and builders of traditional housing – also look to modern artists, weavers, architects, urban landscapers and designers from across the continent. For instance, they source Kente cloth from Ghana’s Ashanti region – from weavers use foot-treadle looms that produce long and narrow strips of cloth, a process that requires painstaking precision and skill – and incorporate these weavers’ beautiful workmanship into shoes and other wearable objects. “The men in the village do the weaving; it’s like a right of passage,” Valley said. “It’s a tradition that’s passed on from older men to young boys with the entire village being structured around weaving”.

Although “It would actually be cheaper for us to just buy mass produced Kente from a bulk producer…we’re actually building relationships and we’re involved in sustainable practices. That’s important to us in the long run. [But] maybe it’s not the best business practice,” she added, laughing.

When Kushn first opened in 2010, Valley and Mntambo were gleaning offcuts from mainstream retail and fashion stores. Soon after they began using shweshwe, a traditional South African fabric. However, they were devastated when they found that the cloth was not made locally, but “printed in Korea, China, Holland and being sold back to Africa.” Even though “There is this amazing legacy and history behind material [production in African countries]…it’s being trivialized by these fake  ‘African print fabrics’ that are so popular,” Valley said.

She is also concerned about how products from Africa are often marketed: “There’s this need to look like you are being socially responsible and you’re helping Africa, but so many [products] are owned by white Europeans moving into these communities and punting so-called ‘ethical fashion’” and using this “help-the-downtrodden” trope as a marketing tool. “I don’t see why you need to label yourself as being ‘ethical’; I’m suspicious of that. You can tell the story of your products without harping on the fact that you’re about social responsibility or being ethical. Why not just be ethical anyway?” Valley added. “Unfortunately a lot of people look for those things because they want to help in some way,” thus unwittingly supporting a business or a designer that simply uses “doing good” to market themselves – without actually benefitting that community they supposedly help.

Kushn prefers a collaborative approach to business. They hire independent producers in an attempt to move away from what is termed ‘social entrepreneurship’. “We’re a business. We make profit and our profit goes back into our business. We just try to practice principles of sustainability by honoring rare skills like leather-making and weaving, because we wanted to explore this tradition that is very much alive,” she said. It won’t be pity-marketing that sells these designs and products. The skill that goes into assembling Greer and Mntambo’s products, and the innovative, beautiful designs will sell them – and thereby keep the communities of artisans, whose work is intrinsic to Kushn’s designs, alive, producing and part of the future of fine African design. 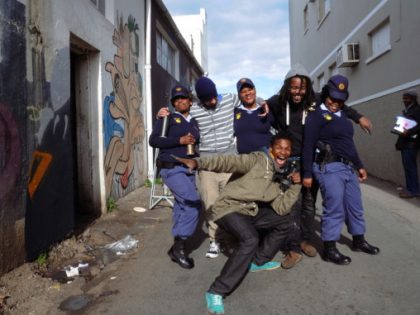 ‘Dreams Close To Home’: In search of the perfect wall to paint in South Africa

Sometime last year, I attended an exhibition opening entitled “Dreams Close To Home” at the Two by Two Art Studio in Newtown, Johannesburg. It was the culmination of a self-initiated project by the artists Lisolomzi Pikoli (Fuzzy …

The manufactured worlds produced by advertising firms using locations around Cape Town as a stand-in for European, British or American scenes