This is the first in a 3-part series of blog posts on sexual violence.

Back in February 2013 gender-based violence dominated media and public talk when South Africans declared themselves woken up, disgusted, outraged and horrified after the rape and murder of working class, black Anene Booysen and the murder of middle class, white Reeva Steenkamp (both by their boyfriends; though Reeva more than Anene). Yet, by the time International Women’s Day announced itself on March 8th, the media seemed to have pretty much moved on. Overall, barely four months after Anene and Reeva’s deaths, the surge of media attention for South Africa’s gender-based violence crisis appears to have wound down. Looking back, it barely lasted two months.

Judging by the relatively limited coverage the stories got, the rape, disembowelment and murder of the 14 year old Thandeka Madonsela and the gang rape of a 6 year old girl in Limpopo in early April barely qualified as news. Then mid-April, a videotaped gang rape had the social media abuzz, but appears to have left few traces in mainstream online media. And around the same time we read a few reports about political commitments on the issue (such as implemented budget increases, the Protection from Harassment Act and the government’s failure to produce a political champion for the cause), students of the University of Witwatersrand came out with allegations of sexual harassment by their very own professors, which got a bit of coverage here and there (we also tried to play our part by tweeting about it a few times). You’d think that the release of one of the two men charged with the murder of Anene would reinvigorate this charged and emotional public debate, or that the 14-year old Nontobeko Zandile Mgobhozi, who was both raped and murdered by her father a little over a week ago, would get into the headlines again. Otherwise, perhaps the rape of a patient by a male nurse might be enough to maintain some degree of outrage.

Does that mean that violence against women has returned to its status of being too common, too ordinary to qualify as interesting? Were the reservoirs of anger, emotion and disgust in places like South Africa drained after February’s media surge? While the number ‘one in four’ seemed etched on everyone’s conscience only four months ago, the media’s interest in the problem feels like a distant memory.

Promising attempts to uncover the underlying masculine ideals of male superiority, toughness, physical strength and how these intersect with other socio-economic factors also largely died down after February. That’s a pity, because we’re not even close to comprehending the intersections between violence and masculinities. In fact, if we take a step back on the timeline and realize that the recent discussions on this topic merely represent one chapter in a story that begun ages ago, we see a rather racialized narrative emerge. Despite the fact that dominant masculine ideals and the violence that they breed affect South Africans of all races, the national and international media have worked both hard and long to suggest otherwise. By conflating the nation’s violent patriarchal character with race and presenting the crisis of gender-based violence as a black affair, the common narrative continues to present white violence as an exception. The Pistorius spectacle–a story about a fallen hero, rather than a woman who lost her life–represents a case in point.

Hardly a new phenomenon, these representations are part of a centuries-old tradition of racist images of hypersexual, uncontrollable and instinctually driven ‘natives’. The demographical fact that 80% of South African men are black seduces many of into thinking that rape, abuse and femicide is a black thing. Especially when popular ideas around the emasculatory effect of unemployment in a capitalist society are coupled with the fact that unemployment and poverty predominantly affects the black population, violent masculinities seem to intersect with race, class and violence in an all too obvious way. In the picture that emerges, the white man doesn’t matter all that much. The oft-circulated story goes: the black unemployed man experiences emasculatory frustration due to his failure to provide the daily bread and therefore tries to compensate for his tainted manhood by displaying his male toughness; women and children are the ones onto whom this compensatory aggression is projected.

But wealth and the ability to provide doesn’t keep men from brutalizing women; white men do matter. A 2006 study on rape perpetration, in which over 1,700 men from all racial groups were interviewed, showed that rather than the poor and unemployed men, it was their economically and educationally more advantaged counterparts who were more likely to rape. Another reason to question the link between (black) poverty and (emasculatory) violence against women is the fact that in surrounding countries, with comparable levels of unemployment, there reported incidences of violence against women is lower. In addition, anecdotal evidence from (rape) hotline counselors suggests that white middle class women are by no means excepted. Yes, white man rape and beat too.

The reason why Oscar’s case made worldwide headlines was obviously due to his fame, which he acquired through his success as a disabled yet successful sportsman. Reeva’s death at the hands of this famous, upper-middle class white star, attests to the fact that violence against women is not confined to the black underclass. Especially now that the veil has been lifted from Oscar’s aggressive streaks and gun obsession, it should be clear that masculine violence cuts across all racial, classed or cultural groups within the borders of the state. The possible role that his disability played in his macho bravado and how this might have driven him to overcompensate with hyper-masculine behavior, is unclear. Yet by emphasizing the exceptionality of his position, we risk obscuring the fundamental ideas about manhood he shares with most of his countrymen; ideas that continue to fuel the assaults. Until women and girls are safe from rape, harassment and violence, the media should pay attention. 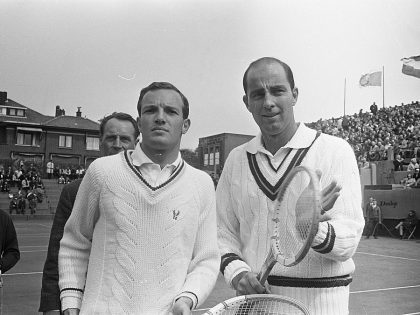 People are going to know who Bob Hewitt is

Bob Hewitt migrated from Australia to apartheid South Africa. There he became a champion in white tennis. He is also accused of abusing children whose families trusted him as their tennis coach.

Kwame Anthony Appiah, the Ghanaian philosopher, talks about coming out as gay.