In May 2012, Vogue Italia devoted its entire issue to Africa and called it “Rebranding Africa.” Naturally, UN Secretary-General Ban Ki-Moon was on the cover. The issue detailed the Vogue expedition into Africa, with editor-in-chief Franca Sozzani pleading with Nigerian president Goodluck Jonathan to build an “African Rodeo Drive”, and gallantly emerging with development statistics, trend reports and photo spreads that purposefully did not include anything “sad, trashy or poor”. If the articles read like NGO-funded, feel-good “development” stories that make you half-expect a request for donations in the envelope enclosed, it might be because Sozzani has been appointed as a Goodwill Ambassador for Fashion4Development — a UN initiative intended to ‘help’ Africa.

The Vogue Italia issue is just one example of the pervasive patronizing frameworks underlying the sudden discovery of fashion and hence, ‘modernity’, on the continent. Even journalists seem to surprise themselves when, as the New York Times put it, “Africa is in the news — but not just for the sad and familiar reasons of conflict and suffering.”

But who is rebranding Africa really? And for what purpose? How much does the shift towards “positivity”, as Sozzani refers to it, actually accomplish if the main narrative still offers Africa as a continent to consume, save or exploit? Most importantly, do the tokenizing special issues really only work to allow the industry to exclude and marginalize African professionals from the fashion arena?

Indeed, a close look at the fashion industry today reveals much more than just the latest trends. In fashion and fashion media, binaries — like the local and the global, the modern and the traditional, the civilized and the barbaric — are constantly being constructed, fastened, and reified.

As designers continue to release fantasy collections inspired by their latest trip to exotic, mystical and faraway lands (Michael Kors, Giorgio Armani) and fashion editorials feature white models amidst backgrounds of hyper-sexualized dark bodies in seemingly equally dark continents (Daria Werbowy for Interview Magazine), it is clear that for the fashion world, Africa represents a sort of otherness. That otherness, and especially the sexuality of the other, is marketed as flavor and spice, something new, sexually raw, and stimulating. Whether depicted in high-fashion advertisements or on the runway, the racial difference becomes both at once threateningly pleasurable and seductively dangerous, positioning it at the intersection of most intimate obsessions with desire and death.

The commodification of difference — with its relation to the primitive — also necessitates a sense of moral duty to conquer and civilize with law and refinement. The mechanisms of exotifying and eroticizing difference operating through discourses of fashion, travel, leisure, and style deeply affect the ways in which those parts of the dominant cultures consume, whether they are sex tourists or suburban mall fashionistas.

Despite the fact that there are still hardly any people of color designers, buyers, stylists, models, or organizers in the mainstream fashion industry, the catwalk essentialism continues, as do the one-time, one issue-only ‘development’ features on African or otherwise ‘ethnic’ fashion. But at least blackface doesn’t happen anymore, right? Oh, wait.

Ten years ago, Senegalese designer Adama Paris created Dakar Fashion Week in an effort to highlight local designs and celebrate Senegalese fashion, art, and self-expression. Although its beginnings were humble, it has now become a major platform for Senegalese and other international designers to showcase their talents. This year featured designers from over 15 countries including Morocco, Pakistan, Haiti, Mali, Egypt, and Ivory Coast, and was made open to the public.

I spoke to Adama about her opinion on the representation of African designs and designers in the fashion industry.

Why did you start Dakar Fashion Week?

I wanted to create a platform for African designers that wanted to show their work in Africa and showcase their designs to African buyers and viewers. During the past 10 years, it’s been getting bigger and better. We’re getting lots of interest from designers all over the continent, which is great. We’re aiming to be a big fashion week like Paris or London – to really be able to showcase any designer who wants to sell and show their designs in Africa.

You mentioned that designers sometimes have difficulty in finding local and international markets to distribute their creations.

Yes, it’s getting better but really slowly. It definitely affects designers’ work. If you spend months creating a collection and you’re not able to sell it afterward. It’s really the worst thing that can happen to a designer. We’re doing it first for fashion but we’re also doing it because it’s our job. I don’t do anything else. I’m a designer. It’s not like I design on the side and I work in the bank. If you can’t pay your rent doing whatever you do, it’s really hard.

I don’t think it’s affecting the creativity of the designers but I think it’s changing the pace of creation. If you have money or someone that’s buying your stuff, you can make a lot, but if you don’t have that much, you can’t even make two collections a year. So of course it affects us a lot.

In addition to creating Dakar Fashion Week to support designers and the African fashion industry at large, you also introduced the first Black Fashion Week last year in Prague. While it’s primarily an effort to represent black designers and the diaspora, it also features black models at a time when the majority of models used in the largest fashion weeks around the world are still white. I think some 90% of the models used in last year’s New York Fashion Week were white.

It’s more. It’s 6% non-white models. And that 6% is made up of Africans, Asians, anybody not white…not only black people. So yes, the fashion industry is white.

And those are just the models.

Everybody is white in this industry: the designers, the buyers, and the audience. And it’s just weird because you have the feeling in fashion that we’re so open. And we’re not. We’re definitely not. That’s why I thought about having a show that can showcase minorities. Of course, when I first started to go see sponsors and partners, they were like oh yeah Black Fashion Week is really communitarian like we just want to stay within ourselves. But that’s not actually the meaning of Black Fashion Week. We wanted to showcase black designers, not necessarily African — but anyway it’s not only about the color. We also had white people from South Africa.

I want them to be part of a black movement that can showcase black or African designers that don’t have the opportunity to show in the big fashion weeks, Paris or London, or elsewhere. How many black designers are there in Paris Fashion Week? None. And New York is the same. London is the same. So those people who said to me, “Oh well why not create a White Fashion Week if you’re going to have a Black Fashion Week”…well, we don’t need a White Fashion Week because it’s already white. If we’re naming ourselves Black Fashion Week it’s because there’s a real need for it, it’s not just because we want to throw a show. It’s much more than a show, it is about educating people on what black fashion is.

You read that crap in Vogue Italia. That proves that we don’t have very many journalists specializing in black fashion. Someone can write about Michelle Obama and call that black fashion, because now black fashion means black bourgeois fashion? That’s nonsense. So I wanted to create Black Fashion Week to work against those systems that categorize black fashion as only one thing, especially in Europe where there is a lack of black fashion. Whatever is done in the fashion industry and termed as “ethnic” or “black” is done by white people.

That reminds me of the Vogue Italia “black” issue published a few years back, by the same Sozzani, which presumably was also edited and conceived of by white people. The industry’s fascination with “ethnic fashion” also brings to mind the countless advertisements that market “ethnicity” as a sort of sexual experience, intense and mysterious, yet also slightly barbaric and backward.

Absolutely. I don’t like the name “ethnic” fashion. It’s just degrading to me. We talked to several partners who wanted us to call the show “Ethnic Fashion Week” and asked us to change the name. I said no, it’s Black Fashion Week. It’s about much more than color, but it is important to name it.

It was difficult at first, but we found funding in Prague, which was cool. Now we’re going to do it in Paris, in October. We found a sponsor in Angola. So it means we have our place. When we do it in France, this will prove that we have a lot of black designers in France and we’re getting help from Africa to showcase our designs in Europe. So there are a lot of people involved in this process and I’m glad we’ll get that sponsorship from Angola.

We’re also going to do it in Bahia, Brazil. They called me because they were impressed with what we did in Prague. After the show in Prague, which was not big, people realized the need to showcase our design outside of Africa. Especially since this is the year of Négritude, and Bahia is a black city in Brazil where all the minorities are, it’s great. They invited me for 10 days and we’re going to do 3 cities.

It seems like a great opportunity to celebrate the art of fashion while making it more accessible by expanding dominant notions of beauty.

Exactly. To me, it’s not just about business. I mean of course, we want to sell. We invite buyers because we want to sell. But first, it’s about our struggle. We’re always fighting to be recognized.

Are you seeing more interest in your designs abroad?

Oh yes, and it makes me smile because there are European designers who are now using wax in their designs, although we’ve been doing it for years and nobody took any interest in it. And in some ways it’s sad. I once saw designs in a magazine from Gwen Stefani and Burberry and next to it was another picture of a dress labeled “African designer”. They didn’t give any credit. It was just awful. But that’s the way the fashion industry in Europe works.

I want to thank the press because honestly we’ve had lots of help from the press, and they stick out for us. Especially when I started out, I was small, and they were here. We have overseas press coming, Le Monde, BBC, so it’s cool to know that there is some interest.

And I’m really happy with where we’re standing now because people know that we’re not only doing it for fashion. I’m a woman of color and I’m sensitive and I do want to fight. Not because I’m black, but for entrepreneurs in Africa, because we need to develop these countries. And we women are a big part of what’s going on in the continent, so this is my part. I love fashion, that’s what I do. That’s why I come back here to Senegal, to help and support, to put Dakar in the spotlight. I think people need to give credit to African women. They’re strong and they stand really tall to pull up their countries and this continent. 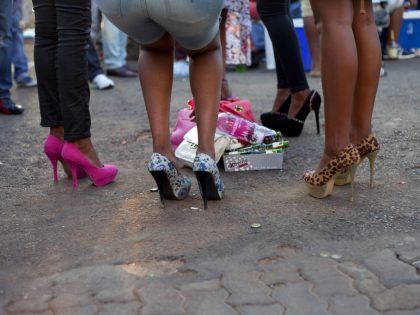 A level of decadence 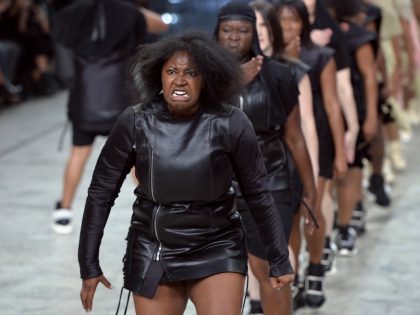 Black women have no say in what is pretty considering it is the job of non-white women to dispel the standards of beauty, and white women to reinvent it. 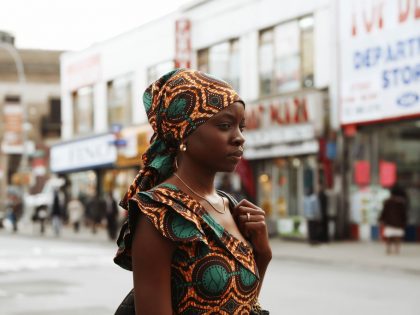 A state of cultural flux 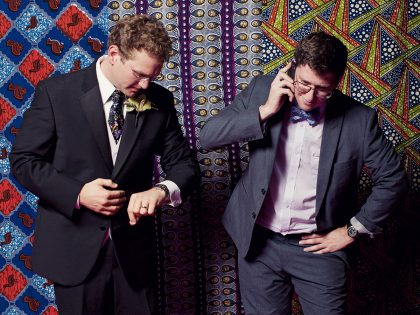 This website thinks it can combine ideas about Africa with shopping. Sean Jacobs interviewed one of the founders of African Lookbook, Aaron Kohn.